Through all of my years of racing and modifying the Prelude, there was one thing that I kept putting on the back burner: The installation of a Limited Slip Differential (LSD). The reasoning was very simple. Despite knowing how they work and reading many reputable articles in big name motoring magazines, I couldn't tell if installing an LSD would actually make my race car faster.

So this off season, after finally clearing off everything else on my modification to-do list, I broke down, bought a WaveTrac Helical Limited Slip Differential, and used it to find out whether a LSD will actually make you faster.

Despite all of the heated brand arguments littering the internet, pretty much any of name brand aftermarket LSDs will do what they advertise. Ask around the paddock at an SCCA race weekend and you will find cars equipped with everything from Quaifes to custom-built clutch packs to knockoff OBX diffs.

I won't go into the details of different differential types work, since Engineering Explained does such a good job of it. What I will say is that the process of choosing the WaveTrac was nothing more than the simple process of elimination.

That left helical differentials as the only practical option. Quaife, MFactory, and WaveTrac all manufacture aftermarket helical LSDs for the H-series Hondas. However, WaveTrac happened to have theirs on clearance. So, a few days and $595 later, I had a WaveTrac LSD shipped to my garage.

While we're in there…

Since changing the diff in a FWD transaxle is a fairly involved process, this is a good opportunity to do some other internal transmission work. When I ordered the WaveTrac diff, I also added the following items to the old virtual shopping cart:

I would also have put a Mfactory/Synchrotech 4.64 Final Drive in too, if my gearing wasn't already spot on for NJMP and Summit Point. Yes, it seems like an expensive list of optional parts, but how often do you get the opportunity to get into the guts of your transmission? I figured I may as well use the opportunity to freshen the worn out bits of the gearbox while it was all apart.

The actual rebuilding of the transaxle was entrusted to my go-to powertrain expert, one Robert Oliver. So sorry, no pictures. I will say that Robert did a brilliant job of it and he did it for significantly less than what I thought it would cost. If you are interested in his services and are in the Mid-Atlantic area, drop me a line and I'd be happy to give you his contact info.

As they say, a picture is worth a thousand words and a video is worth a million. While I dispute the mathematical accuracy of that assertion, I made a video anyway.

This is this is a split-screen video comparison of two in-car shots videos around NJMP Lightning, one from when the car had an open differential and the other after the LSD was installed. I clocked the time it took to get through Turn 5 and let the stopwatch run through the bottom of the bridge.

Here's what the GPS data showed:

The LSD is worth almost a half second of time through Turn 5 alone. There's clearly an increase in exit speed as well, as I get another tenth of a second by the time the car reaches the entry to Turn 7. That's pretty good considering that's only one corner and we're only looking at time on the ideal racing line.

While Turn 5 at NJMP may look unique, you won't have to look hard at your local track to find a turn where a LSD will work just as well. You know that one slow turn where you feel like you spend an eternity waiting to get back on the accelerator pedal? That's the corner where the LSD will give you the biggest time advantage.

Does it change how the car drives?

Installing a helical LSD doesn't change the behavior of the car very much. There was no less understeer and the car didn't magically pick up extra grip. I could drive the car in the same exact way on the same exact line as when the car had an open diff.

The only differences I noticed were that:

It might feel a little disappointing knowing that a high-dollar modification like this makes so little difference in how the car feels. Of course, helical LSDs are designed to limit wheel slip when they need to and act like an open differential everywhere else. This is just the diff working as advertised.

Is it worth it?

If you are driving the ideal racing line in good track conditions, a helical limited slip differential won't make a huge difference in your driving. Sure you might be able to apply the throttle a little earlier through the carousel at Summit Point or be more aggressive with the Turn 1 kerbing on NJMP Lightning. But aside from shaving a bit of time off of one corner, adding a LSD won't transform the car the same way that stickier tyres or a good chassis setup will. If you spend most of your time running untimed track days or DE events, adding an aftermarket LSD probably isn't the best use of your hard-earned cash.

Under wheel to wheel racing conditions, it's a completely different story. In a race, the expectation is that you will spend more time off of the ideal racing line than on it. Overtaking, defending, and going side-by-side with a competitor are all actions that force you to drive a less than ideal line so you can gain or retain a position. 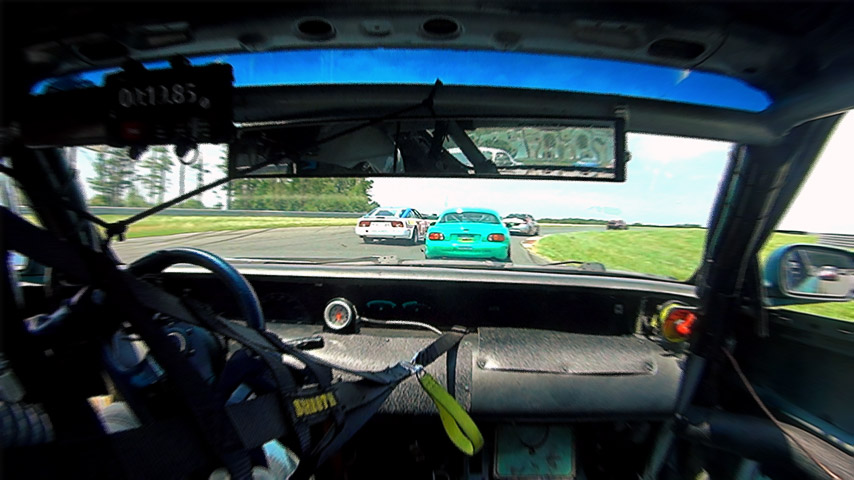 None of the cars in this shot are able to take the ideal racing line. Because of this, every one of these cars would benefit from a Limited Slip Differential.

The main side effect of driving off the ideal racing line is that cornering speeds plummet. All of the sudden, high speed corners become medium speed corners and medium speed corners feel like hairpin turns. Sometimes you'll have to put a wheel on the grass to avoid car to car contact or to make sure that you can stay on the road for the next turn.

It's times like this when you will want a limited slip differential in your car. Every time you get squeezed off of the ideal racing line, having an LSD gives you the option to apply a that little bit more throttle so you can get ahead of the competition.

A limited slip differential lets racers make the best of less than ideal conditions. They won't eliminate understeer or magically give you more grip. At some high speed tracks, they may not even help your lap time. But when you find yourself riding halfway up the tall kerb of a 2nd gear corner with your nearest competitor pulling his passenger front fender next to your driver's side window, a LSD is the best tool you have to keep him behind you by the end of the next straight.

The downside is that it is costly and installation involves taking the transaxle apart in FWD and AWD cars. Because of this, my recommendation is that you make this one of the first or one of the last modifications that you make to your track car. And while you're in there, replace as many worn-out transmission parts as you can find in there.