Now that we are done assembling and fiddling with the Tenhulzen 4-Wheel Alignment System, it's time to put it to good use. Our testbed is a '90 Honda CRX Si prepared for endurance racing by the team at ProjectCRX.com.

This particular CRX has had a colorful history of racing-related abuse, including being thrashed to a class victory in its first ever race before being rolled onto its roof on the very next day. We are giving this CRX a fresh new alignment to prepare it for another season of rough and tumble racing.

Because alignments require mind-numbing precision and frequent double-checking of numbers Martin Szwarc, regular driver of ProjectCRX, is helping me with this task.

The Order of Operations

Due to the nature of how suspension systems work in production cars, there is a standard order of operations for aligning race cars:

The ride height and corner weights had already been set, so we skipped right to the caster and camber.

The Tenhulzen gauge shortcuts this a bit with some 20-degree angles built into the sides of the gauge. All you do is attach the gauge to the wheel and turn the steering wheel until the angled cut is parallel to the bodywork of the car. Turn the digital gauge on and hold the zero button down until it reads 0.00. Then turn the wheel until the angled cut on the other side is parallel with the side of the car. Multiply whatever it says on the gauge by 2 to get the caster angle.

The procedure is pretty straightforward, and I was relieved to see the caster angles on the left and right front wheels come within 0.1 degrees of each other. This was an indicator that nothing was bent and that I wouldn't have to touch the caster.

Camber adjustment is very straightforward with the Tenhulzen gauge. Place the magnetic angle finder on the ground to zero it, then place it on the little L-bracket on the gauge. Then stick the gauge on the wheel and read the number that shows up. 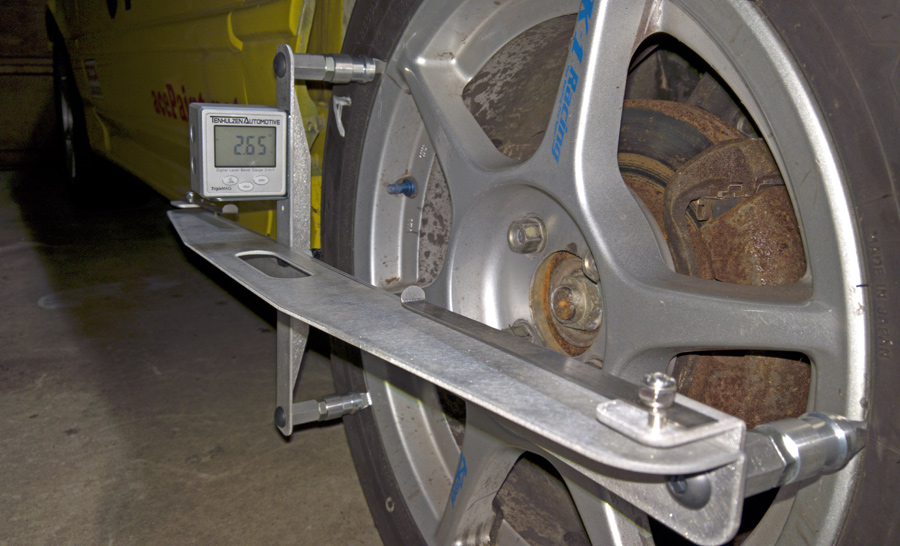 Surprisingly, Martin and I had a lot of trouble getting the numbers to show up consistently at first. We just couldn't get the fingers to grasp the wheel consistently. It turns out the reason for this is that the slits that make the gauge adjustable are cut slightly too wide, which lets the short arm shift so that it isn't quite perpendicular to the long arm. If the two arms of the camber gauge aren't perpendicular to each other, the fingers can't grasp the wheel properly and the gauge reads incorrectly.

Martin also found that he could bend the gauge with relative ease and force the fingers into the tyre to throw the readings off even further. Although this probably has to do something with the fact that Martin weighs 200 lbs and is mostly made of muscle, there is something to be said about the relative flimsiness of the gauge compared to some of the other camber gauges I've used in the past.

Nonetheless, through practice and patience we persevered to get the CRX to -2.65 degrees Front and -3.5 degrees Rear that we wanted out of the car.

Finally, we set up the strings and rack so that we could get an accurate 4-wheel toe measurement on the car. The procedure is straightforward but requires some care. First, we adjusted the width of the rack so that the inner rivets on the horizontal sections were slightly wider than the car, and made sure that both front and rear frames were the exact same width. Then we pulled the strings out and hooked them onto the frame so they sat slightly higher than the centers of the wheels. Then came the most tedious part - squaring the strings.

In order to get an accurate toe measurement on the car, the strings need to be perfectly parallel to the true centerline of the car. With the Tenhulzen system (as with most string-based alignment systems), this is achieved by moving the front and rear frames so that the distance between the center of the hub and the string is the same across the left and right sides of the car.

Here's a diagram that helps illustrate what needs to be done: 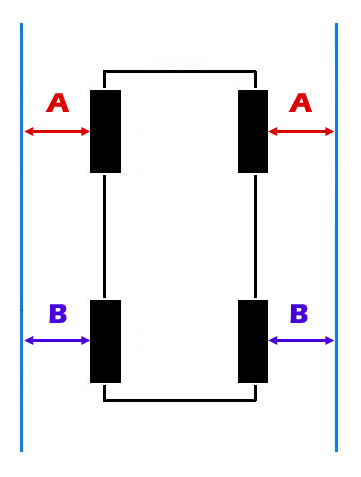 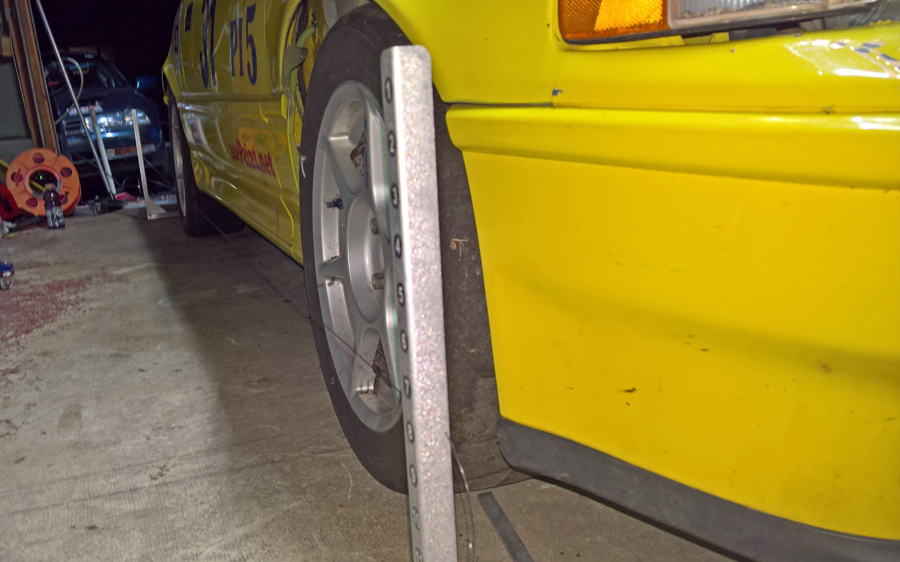 This took quite a bit of time to achieve, not in the least because I kept snagging the corners of the frames with my pants. But once we got it, measuring the toe was a very straightforward process. All we needed to do was to fold out the rulers on the sides of the gauge and get the difference between the measurements. If the front ruler shows a larger measurement than the rear, the wheel has toe-in. If the rear ruler shows a larger measurement than the front, the wheel has toe-out.

One neat feature of the gauge is that if you adjust the two rulers so that they sit all the way on the outside of the gauge, you can measure the toe in degrees. Just read the metric side and remember that 1mm = 0.1 degrees. I usually have to do a bit of trigonometry to get the actual degree measurement, so this is a real time-saver for me.

Getting the toe right took quite a bit of time, as I kept having to reposition the frames every time I raised and lowered the car. But because we could measure the toe of each wheel individually, we could adjust all four wheels at once and skip a lot of the guessing and checking. More importantly, the ability to measure against the true centerline of the car meant that, once we were done, the thrust angle of the car would be 0 and the steering wheel would point dead straight. Getting this right without doing dozens of test drives ultimately ended up saving a lot of time and frustration.

Of course, all of this would be meaningless if the gauge wasn't accurate, so we took the time to check each measurement against my tried and true Joe's Racing bubble camber gauge and Longacre Quickset Toe gauge.

Initial comparisons had us worried, as we saw a huge discrepancy in the camber figures between the Tenhulzen gauge and the Joe's Racing gauge. The cause of this discrepancy turned out to be a combination of the gauge sliding about and our inability to get the fingers to grasp the wheel rim consistently. Practice makes perfect, as they say. After a few tries we had both gauges reading within 0.1 degrees of each other.

Caster was dead-on with my bubble gauge as well. Though the actual measurement process was decidedly easier using the Tenhulzen gauge due to its fingers and re-zeroable digital angle finder.

Is it User Friendly?

Yes and no. During our alignment session, we found a wealth of time-saving features cleverly engineered into the system. At the same time the flimsy aluminum construction of the gauge and rack led to a litany of do-overs before we had accurate measurements on all four wheels. The rim-grasping fingers, while brilliant, also take some getting used to with certain wheel-tyre combinations.

All in all, the Tenhulzen 4-wheel alignment system requires quite a bit more finesse than your usual set of toe plates or bubble-level camber gauge.

The Tenhulzen 4-wheel alignment system is a cleverly engineered tool whose brilliance is tarnished ever so slightly by its flexible aluminum construction. The intricate details that were put into both the frame and the handheld camber/caster/toe gauge take away many of the annoyances of doing alignments. The use of fingers to attach the gauge to the wheel is simply, a stroke of genius. Unfortunately, I can also see a lot of people accidentally bending the gauge as they take their measurements, inadvertently throwing their measurements way off.

That said, I believe that the value for money is excellent. I don't know of any other system that comes close to delivering this level of functionality for $500. Sure, you could probably DIY your own string alignment rack and even make your own copy of the very clever camber/caster/toe gauge (little known secret - the fingers are available as off the shelf parts made by SPC). But for that price I would rather buy the whole system than trying to reproduce the meticulous engineering detail designed into the Tenhulzen kit.

Overall, I would recommend this system to anyone who has previously owned or used a toe gauge and/or camber/caster gauge. If you have some sort of prior experience with alignment tools, you would probably be able to tell if something looked odd or if you were doing something to accidentally throw your measurements off. If Tenhulzen were to re-engineer this kit using thick aluminum or steel plate like my Longacre alignment tools, I would probably revise this recommendation to include absolute beginners.

As for me, I plan to make this system a staple in the garage for use with both our race cars and street cars.