Those of you who have been following our activities have no doubt witnessed the untimely demise of our 2019-spec H23A1 motor. While it was an immense disappointment to see the Powertrain Wizard's hard work go up in smoke, we had no intentions of letting that stop us. Instead, we brought the car right back to Robert's garage and combined our rebuild plans with our pre-planned upgrade for the 2020 season.

The short answer is "oil starvation." The long answer is that we overwhelmed the stock oiling system of the H23A1 with the cornering grip of our wide tyres and functional aero. While the Honda OEM oiling system was perfectly adequate for SCCA Improved Touring levels of grip, the mild baffling of the OEM oil pan just isn't enough to prevent oil starvation from the high cornering G's generated by 245mm width Hoosiers, a big rear wing, and a 3" front splitter.

With so little oil going to the oil pickup, the rod bearing under cylinder #2 spun, causing the OEM rod bolts to shear apart right below the retaining nut. What ensued was a catastrophic disintegration of the stock H23A1 rods which culminated in the remains of the rod bolt exiting the engine block and landing on the driver's side shock tower. 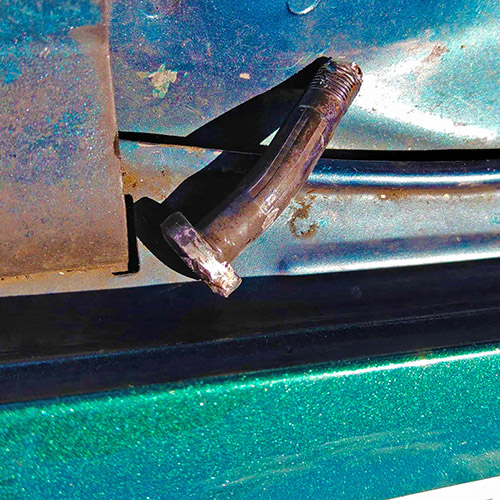 Not even the best racing oil available would have saved our motor from this failure. Here's what was left in the oil pan: 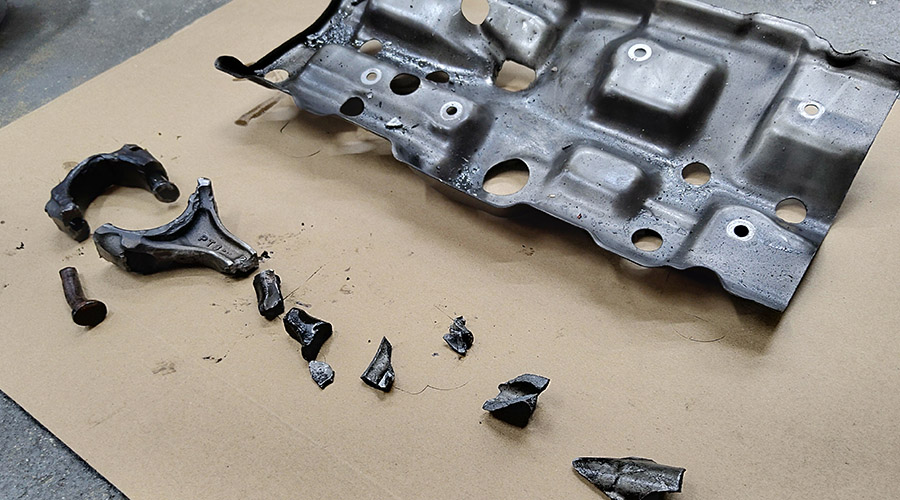 What Are We Changing? 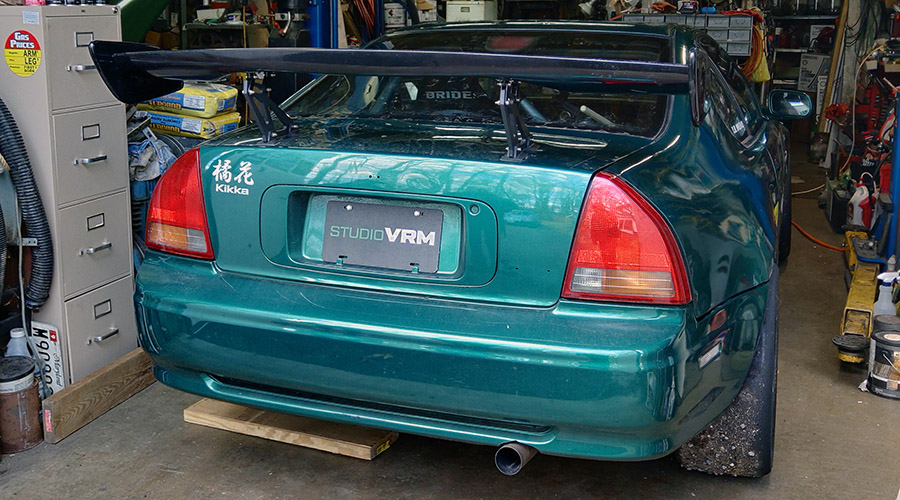 As a result of this hard-learned lesson, we focused on two areas when building our 2020 engine:

While the oil system improvements were an obvious must-have, we also had a desire to get more top-end power from the H23A1. Based on past conversations with top Honda Tuner Jeff Evans, we knew that we that the Improved Touring-legal head and OEM intake manifold were not flowing enough air to take full advantage of our aftermarket cams and 12:1 compression bottom end.

After several discussions with Robert, we decided it was the perfect time to make the motor more reliable while building it closer to the limit of SCCA Super Touring Under rules. And so, Robert went digging in his basement full of Honda parts in search of a new H23A1 head, while yours truly went looking for a clean block that we could use to start rebuilding StudioVRM Racing team's 2020-spec race motor.

Beefing up the Bottom End 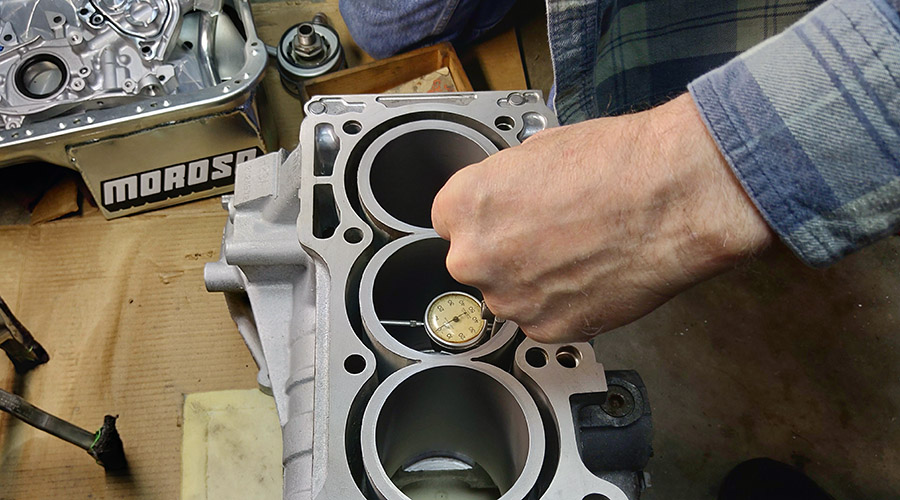 If you just looked at the specs on paper, you wouldn't notice much of a difference between the short blocks of our 2019 and 2020-spec engines. The new engine retains the basic concept of our 2019 engine, using a H23 block with different rods to raise the compression to 12:1. But there is much more than meets the eye to our 2020-spec bottom end. 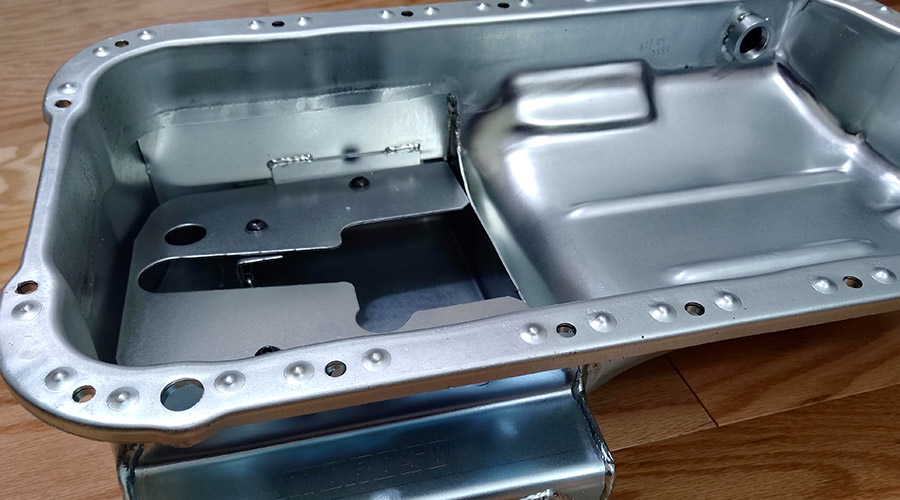 An aggressively baffled Moroso Road Racing oil pan now adorns the bottom of our freshly honed block, increasing its oil capacity to 5.5 liters and providing much-needed protection against oil starvation from high cornering G's. A new Honda OEM oil pump will maintain a steady flow of engine oil and a KS Tuned Balance Shaft Eliminator kit will ensure that we get consistent oil pressure across the H23's wide powerband. 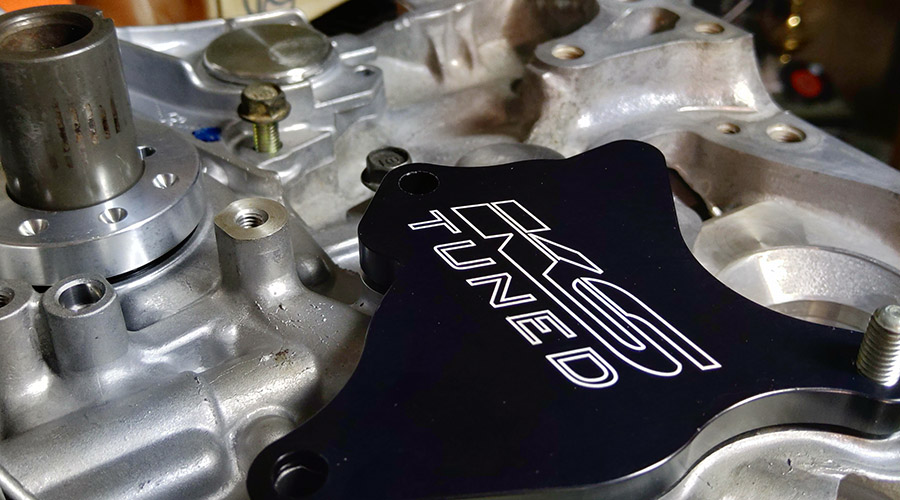 The Powertrain Wizard replaced the stock connecting rods with aftermarket units that used standard rod bolts instead of the OEM press-in kind. This seemingly insignificant upgrade makes a huge difference in Honda H-series engines. This will let us run the motor at higher revs while without the risk of another rod bolt failure. King bearings are once again the bearings of choice in our new engine. 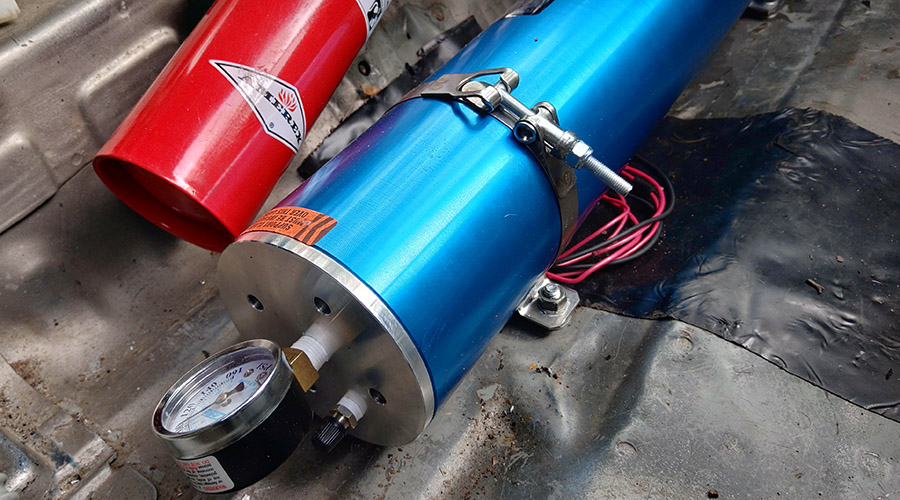 As an added safety measure, we installed a 3 quart Canton Accusump oil accumulator. This device acts as a reserve tank for the engine oil. When oil pressure drops below a certain point, it automatically pushes fresh oil into the motor, acting as a safety net to prevent major issues. At over $650 for a full kit, it was easily the most expensive part on our shopping list. But considering how much time and money it takes to build and install a new engine, we see this as a very worthwhile investment. 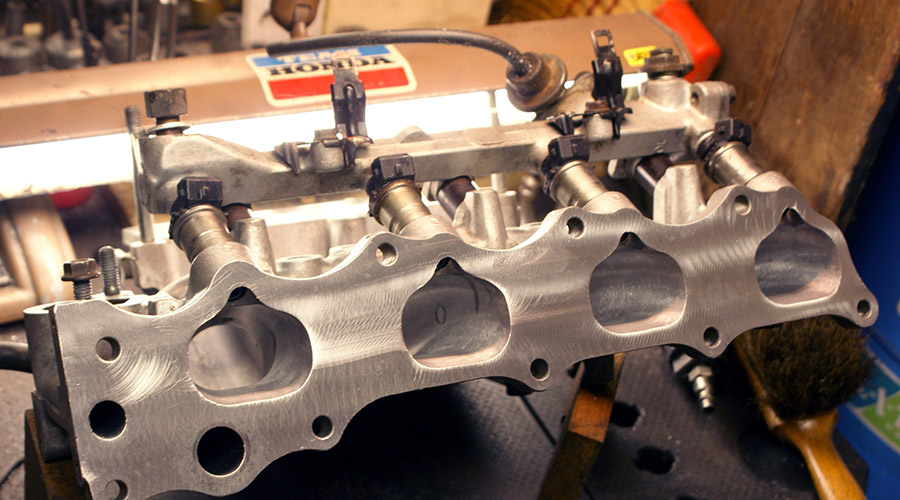 Once we had a bulletproof foundation for our new engine, the Powertrain Wizard turned his attention to boosting our engine's power power. During our last visit to Evans Performance Academy, Tuner-Owner Jeff Evans pointed out how much power we were losing from our restrictive stock intake manifold, mildly ported head, and OEM throttle body. SCCA Super Touring rules allow modifications to two out of three of those areas, so Robert went to his grinding station and began freeing up airflow. 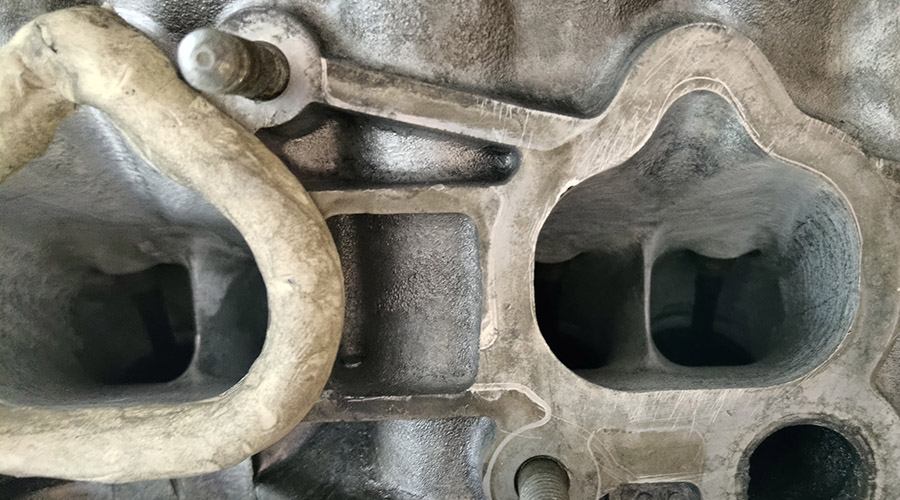 Through weeks of meticulous shaping of both the intake and exhaust ports (punctuated by frequent trips to the flow bench), the Powertrain wizard was able to achieve flow numbers that far surpassed our original H23A1 head. He also bored out the stock H23A1 intake manifold and removed the intake butterflies to ensure that there was enough volume and airflow to feed the free-flowing head. 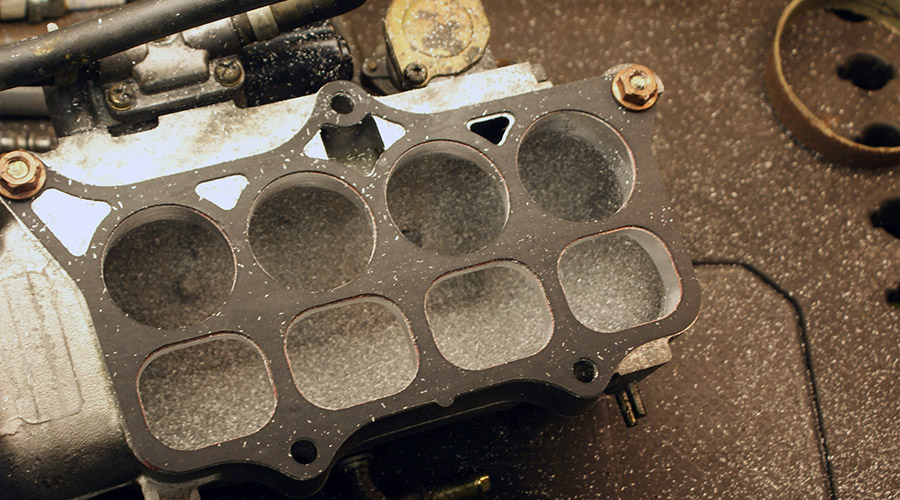 Flow bench testing provided very encouraging signs. Our new head and intake showed much improved numbers, similar to what you would see from a ported H22 VTEC head. Considering the difference in port sizes between the stock H23A1 and stock H22 head, this is a huge achievement. While peak flow numbers were a bit short of Robert's best race-ported H22 heads, he was confident that the gains we made here will make a noticeable difference on the dyno as well as at the track. 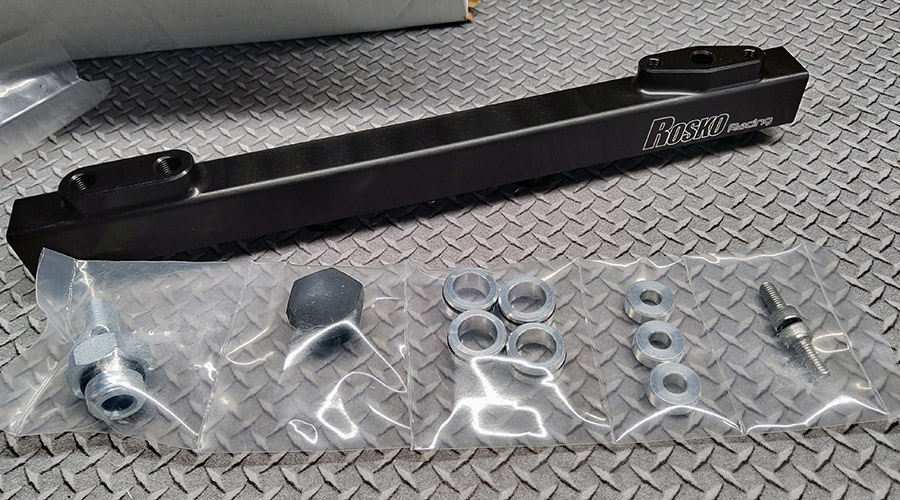 Internal combustion engines need both air and fuel to make power. If you increase the airflow to the cylinders, you need to inject more fuel. Based on the Powertrain Wizard's calculations, the OEM Honda injectors in our Prelude would not flow enough fuel to take advantage of the airflow from our new intake manifold and head.

In response, we ordered a set of 410cc Acura RDX injectors and a Rosko Racing fuel rail to allow increased airflow. We also ordered a jumper that will bypass the OEM resistor box to ensure that the injectors operate as they were originally designed. Once installed, this should give us plenty fuel so we can get the maximum out of the 2020-spec motor. 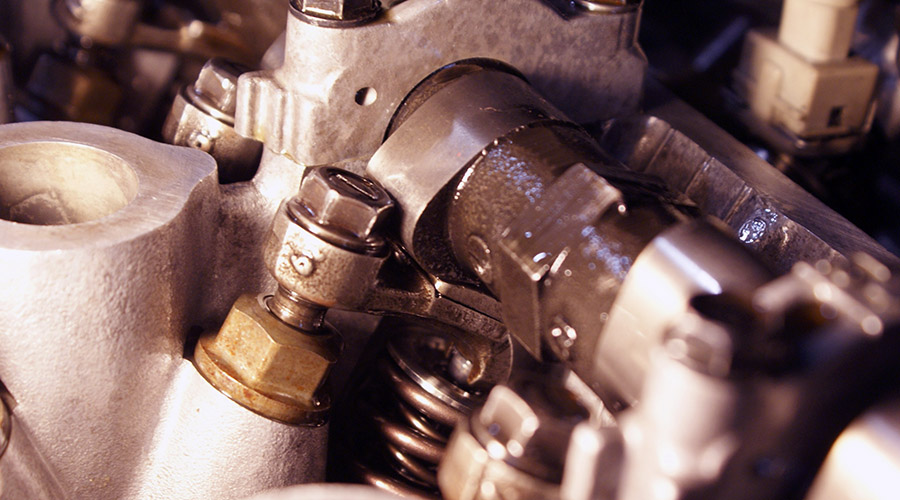 One of the consequences of building an experimental engine is that you sometimes run into some unexpected issues at the strangest of times. Within seconds of starting the new engine for the first time, the Powertrain Wizard noticed a loud clatter coming from under the valve cover of the new motor. A closer inspection revealed that our custom-ground Racer Brown cams were hitting the adjuster nuts on the rockers as they turned. This was not good.

After some research, we found out that the high rocker ratio of the H23A1 rockers demand an asymmetric cam profile in order to open and close the valves without causing clearance issues. However, the lobes on our Racer Brown cams appeared to have been ground to a symmetrical shape. This would allow the cam lobes to come in contact with the adjusters, causing the rattling noise and causing unwanted friction in the delicate valvetrain. 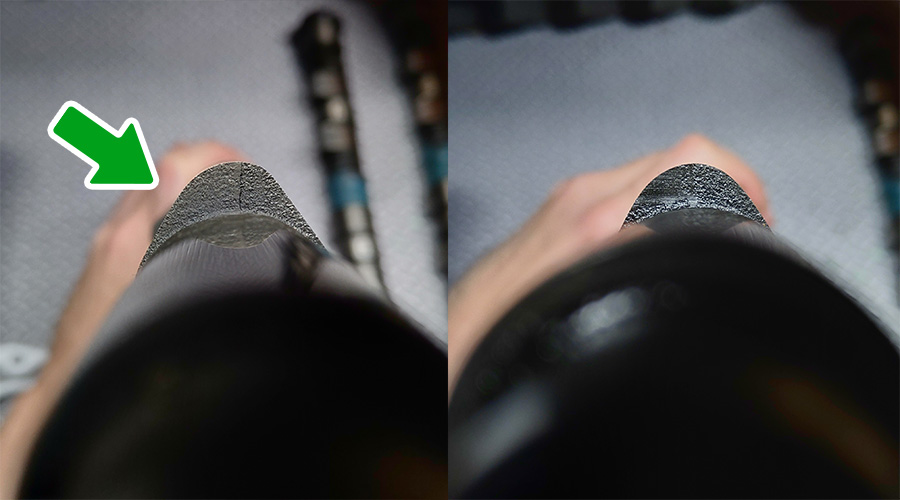 A comparison of cam profiles between the OEM H23A1 intake cam (left) and the Racer Brown intake cam (right). Note the curved ramp on the left hand side of the lobe and the flat slope on the right of the OEM cam. These features are missing on the Racer Brown race cams.

In response, Robert recommended that we make a switch to Crower Stage 3 H23A1 race cams, which boasts similar amounts of lift and duration while retaining the critically important asymmetric lobe profile that we needed. Even with these new cams, a test fitting showed that the cam lobes still came uncomfortably close to the rocker adjusters. So after some more number crunching, Robert sunk the valves 0.025" into the head. With this modification, we finally had enough clearance between the lobes and the rocker adjusters. 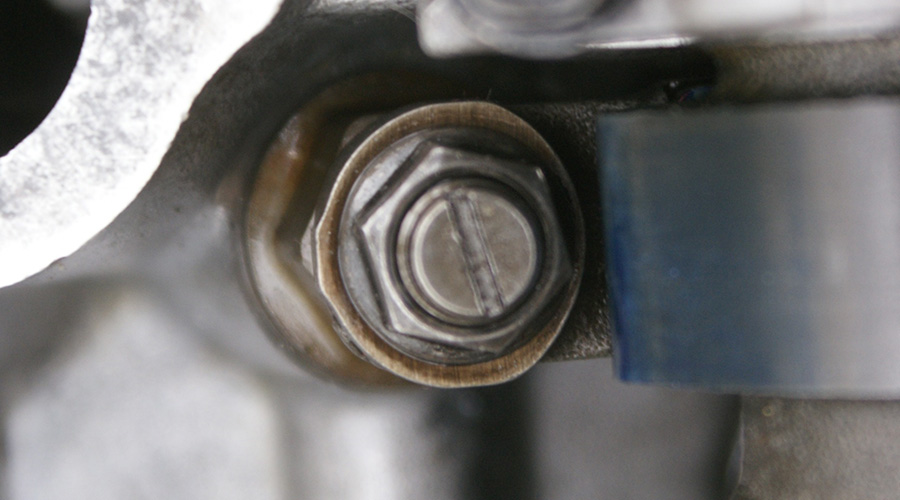 I would be lying if I said I wasn't worried about this late breaking drama. Both the issue and the proposed fix were far beyond the understanding of someone who has admittedly limited experience building high performance engines. Thankfully, Robert has decades of Honda engine experience and has top notch problem solving skills. His calculations proved correct, and his fixes worked exactly as expected. The newly reassembled motor roared back to life with little more than a rhythmic light tapping coming from under its valve cover.

How does it run? 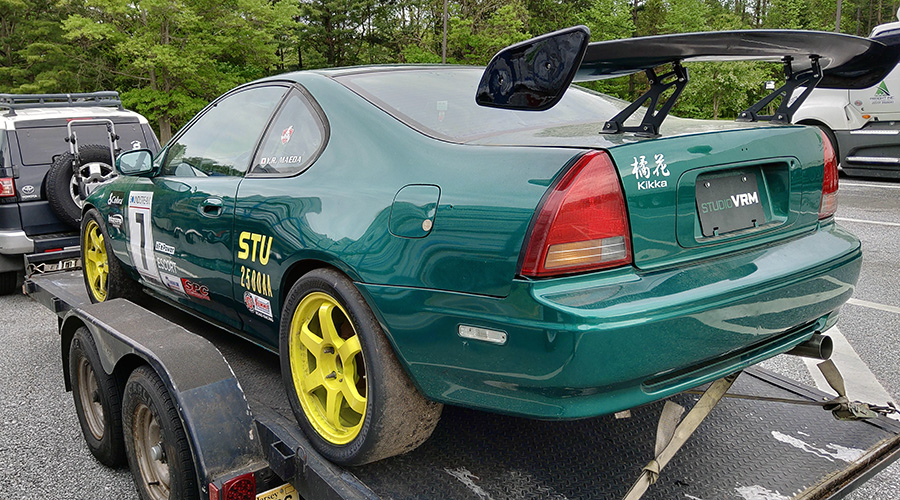 At this point, we know that the motor runs well in a test environment. Due to prevailing conditions, we have not yet had a chance to fully dyno tune the motor or put it through its paces on a racetrack. In truth, we don't really know how well our new powerplant will perform when it is being put through its paces.

That will change in the next few months, as we will be taking the StudioVRM Honda Prelude back to Evans Performance Academy to be re-tuned by one of the best Honda tuners in the world.

How much power will this new motor make? Check back soon to find out.

Neither StudioVRM, Roger Maeda, nor Powertrain Wizard Robert Oliver are affiliated with any of the manufacturers or suppliers mentioned above. All of the products mentioned above were bought at full price using Roger's own money, or salvaged from the deep dark recesses of our garages and basements.