I hope you got a good laugh from my trial of errors in applying Elastiwrap. Don't worry, I don't mind. After a full day of drying time, the Prelude had a brand new look and was ready for the track.

Before we get to my real-life durability testing, I'd like to talk a little more about some of the odd properties and behaviors of Elastiwrap.

If any of these behaviors pose a problem for you, my recommendation is that you consider using something other than Elastiwrap. If not, spray away. As it turns out, it's quite the tough finish.

Our real-life durability testing for the newly wrapped Prelude was very straightforward: Enter the car in a SCCA Regional and see how the finish holds up. So off it went to the Thunderbolt circuit at NJ Motorsports Park for three sessions of hard driving in 100+ degree weather. The only modifications we made to the exterior were a set of new number plates, some updated SCCA decals, and some vinyl tape to temporarily cover up the 1s, as one of our competitors had already registered as #17.

The number change would become permanent as we discovered that the airstream had lifted the vinyl tape off of the hood of the Prelude and took the 1 with it. Apparently, vinyl tape sticks to vinyl better than it does to Elastiwrap. Oops. I guess Team StudioVRM will be running as #7 for the rest of this season.

The weekend itself was eventful, to say the least. A poor qualifying put Team StudioVRM towards the back of the ITS field for the Saturday Qualifying Race. An assertive outside overtake on Wes Czech in the #29 Czeckered Flag Racing RX-7 and the #89 s30-chassis 240z driven by Jacob King saw the Prelude claw back up the order, only to lose the advantage in a wild off-road excursion, leaving us with it all to do again.

Then the entire race field discovered that our biggest opponent that day would be the weather. The oppressive heat started taking its toll on cars and drivers. We made up three positions in the last five laps of the race as drivers began to back off and retire as oil, coolant, tyres and drivers began to overheat. The joy was short lived, however, as a post-race inspection showed that the oil filler cap had gone missing. About 3/4 of a quart of oil had escaped the crankcase and the driver's side fender was now covered in Penn Grade 10w30. By the time we found it, it had already soaked its way into the Elastiwrap and permanently changed the color of the coating. Damn.

The Sunday Feature Race would be even crazier. Hopes of a clean start from 5th on the grid were instantly dashed when an ITR S2000 barreled up the inside from last on the grid and split the ITS cars into turn 1. The driver of the S2000 must not have been as familiar with Thunderbolt as many of the rest of us. Instead of charging up the field to meet his fellow ITR competitors, he drove through most of the corners in the middle of the track as the entire midfield formed a huge train behind him.

Relief would come with a sudden and dramatic slowdown at the beginning of the main straight when the driver missed a shift into 5th. Unfortunately for us this would happen just as we were getting in position to draft. When the S2000 slowed, our only options were to take to the bumpy grass alongside the main straight or drive into the trunk of the Honda convertible. So off to the grass we went, eventually completing a terrifying 85mph overtake through the dirt. Wes and Jacob took full advantage of this opportunity and I looked on helplessly as two iconic Japanese sports cars flew past.

For the next ten minutes, the three of us (later joined by a Green NB Miata) would share a close battle for best-of-the-rest status, constantly swapping positions as each car showed its strengths. The FC RX7 is known as a powerhouse in ITS so Wes inched away from us through every straight. The S30 240Z, meanwhile, made good use of its powerful brakes and low chassis weight to challenge us under braking. The Miata made up for any loss of time through the straights by dominating the low-speed third sector while our 4th gen Prelude breezed through high speed corners with ease.

As it so happens, things would come to a dramatic close. In a desperate attempt to fend off the RX7 on overheated tyres we ran high on rough kerning through the last turn before the straight. The resulting vibration knocked both front caliper pistons back into the calipers, so when it came time to slow down, there were no brakes. The third off of the weekend involved a high speed off-road venture through the gravel with the e-brake fully engaged. Although there was no mechanical damage to the car, the resulting spin and off took a huge chunk out of the right front tire. We had no choice but to pull in and retire from the race.

It wasn't all bad. Wes, the eventual winner of our four-way fight, came over afterwards and we had a good laugh about the battles of the weekend. He was also kind enough to edit and post his in-car footage from Sunday:

As far as durability tests go, I don't think I could have done much more than that. Rock chips, dust, sand, gravel, errant fluids and a light tap from behind through the Octopus made for as harsh an environment as I could throw at the ElastiWrap finish.

The Conclusion: Elastiwrap is Tough 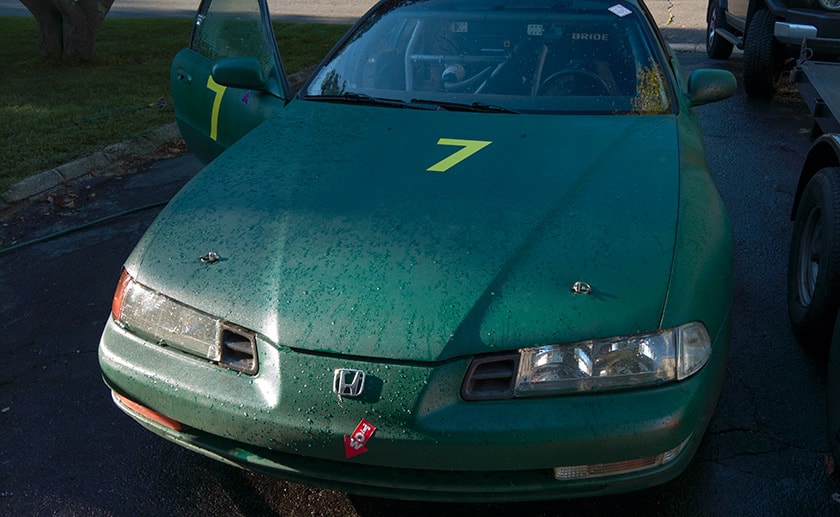 The good news is that Elastiwrap is like automotive paint's burly hairy-chested big brother. Rocks, rubber bits, and other flying debris don't seem to leave any visible marks in the coating. With normal automotive paint, you would expect the paint to be chipped and pitted after just a few on-track sessions. Take a look at this close-up of the front bumper. This was what it looked like after those massive high-speed offs and bumper to bumper racing from the weekend: 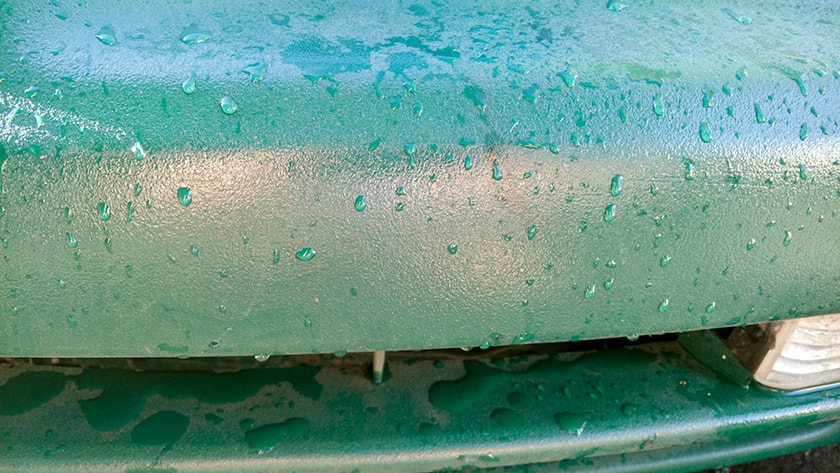 It also held up exceedingly well against heat. There's no peeling on or near the hood from engine heat. The tailpipe did come in contact with an Elastiwrap-coated section of the rear bumper and that did melt the Elastiwrap. However, based on the burn marks, it looks like the bumper melted before the Elastiwrap did. This certainly supports Eastwood's claims about Elastiwrap's heat-resistant capabilities. 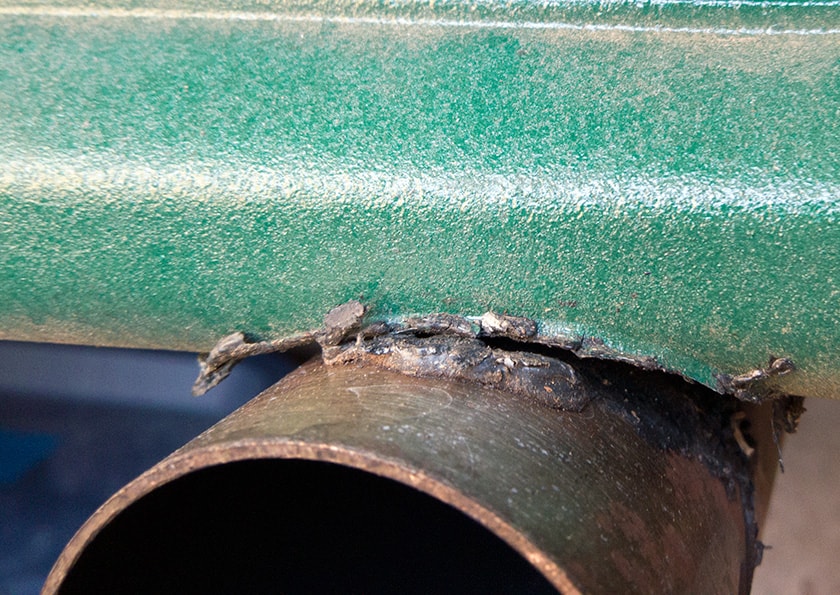 The bad news is that the coating also picked up a fair bit of dirt and it wasn't very easy to wash off. Standard automotive car wash didn't seem to do much of anything and the rubbery surface precluded the use of terry towels for drying. So I took the unusual route of spraying the car down, panel by panel, with 409 and using a garden hose to spray the dirt off. It also doesn't dry very quickly, so to speed up the process I used a leaf blower. Not kidding. It worked great.

Any surfaces which contacted automotive fluids were permanently discolored and no amount of degreaser would change that. I also lost any decal that hadn't been applied using the wet application method. I'll know for next time. 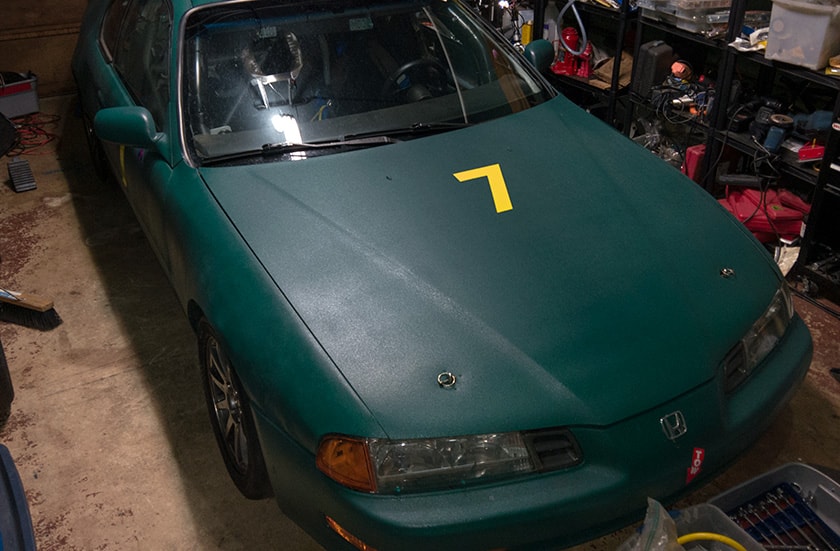 Having mixed, sprayed, experimented, and track-tested Elastiwrap, I can wholeheartedly recommend this temporary coating for your racecar. The key word here is temporary. While I love the look and the price, the rubbery finish picks up tons of dirt and is a bear to clean. Its tendency to absorb automotive chemicals also makes it all too easy to destroy. I suspect that I will be re-coating the car again after a year or two of hard running just because I'll have gotten it so dirty.

That said, at ~$300 for four gallons of Elastiwrap, I afford to re-coat the car on a yearly basis. It's easy enough for a complete paint novice to do in a home garage. It's so easy to work with that I could make next year's more elaborate than the last at the cost of a few paper stencils. In fact, I think I will.