A little PSA for all of you who tow a trailer to transport your track car or bike. Don't use the wire bundle that comes with those LED trailer light kits. Here's what happened to me this afternoon:

I recently noticed a problem where the lights on my 18' car trailer were starting to go out, one by one. First it was the right front corner light that started flickering before going out. Then a few days later, the left rear brake light started to flicker before it too went dark. This all seemed a bit unusual, not in the least because I had just replaced the trailer wiring and lights just a few months ago.

After removing and cleaning the grounds and swapping the lights again did nothing to fix the problem, I started cutting the 3 month old wiring off of the trailer. Imagine my surprise when I found this in the MIDDLE of a 7 foot length of electrical wire: 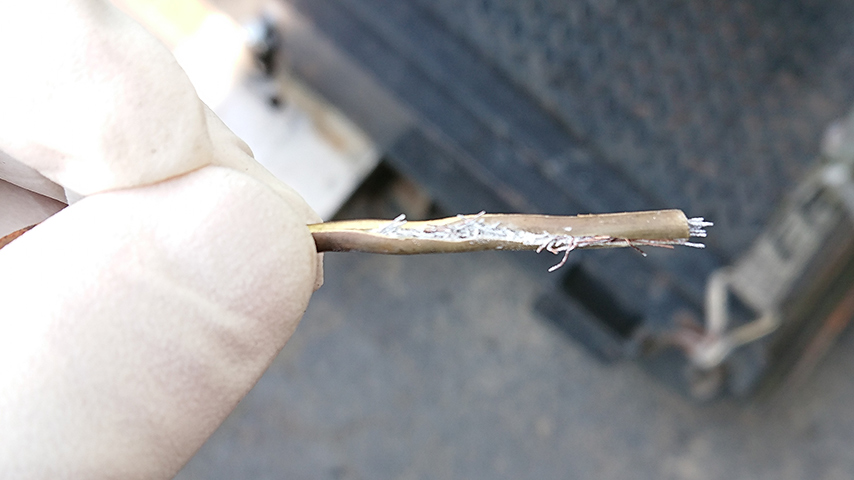 That blueish white dust coming out of the plastic insulation is oxidized copper. Somehow moisture had gotten into the wire and corroded the conductive wire inside. But this wasn't your average case of wire corrosion. When I peeled back the insulation, I found that it was so bad there was literally no wire left:

What made this really unusual was that this was in the middle of an unbroken length of wire. The nearest connector (a heat shrunk water-resistant butt connector) was at least 3 feet away. How could this happen in just a few months, especially when the trailer spends most of its time sitting in a driveway?

It turns out that the wire bundles that come with these trailer LED kits have a major manufacturing flaw. The colorful brown-green-and-yellow wire bundle that comes with these kits are made with a big air gap between the wire and the insulation:

That means that if any water or moisture gets in through a broken connector or a cut in the insulation, it's free to travel up and down the entire length of the wire, destroying it from the inside out. You would never know that there was a problem until the lights on your trailer went out and some inattentive driver crashed into your rig.

I thought it might have been a one-off problem with the brand that I bought, so I cut open three other leftover wire bundles that I had from previous trailer light replacement jobs. Every single one of them had the same problem despite being bought from three different stores and were made by three different manufacturers. Needless to say, I spent the next two hours crawling under the rig and replacing every bit of cheap wire I could find with Japanese-made automotive speaker wire.

It was probably an unnecessarily expensive way of dealing with the problem, but I wasn't going to take any chances. I tow my car in the wee hours of the morning to get to the racetrack. I don't need anyone crashing into me on the way there.

Tow safely. See you at the track.