As part of my long-term experiment with PTH racing oil, I took a small sample of 5w30 from one of the bottles I had bought and sent it out to Blackstone Labs for an oil analysis.

For those of you who aren't familiar with the name, Blackstone Labs is one of a few independent laboratories in the US with the equipment to break down and analyze the components and characteristics of engine oil for automotive, aeronautic, and industrial equipment. They offer an inexpensive service where you can send in used motor oil out of your street car, and based on the properties of the oil, tell you about the condition of your engine internals and give you an early warning about any potential problems. They can also perform a similar analysis on fresh oil (aka virgin oil) and give you detailed breakdown of the types and amounts of common metals and additives.

I wanted to verify PTH's claims about the properties of their oil. So I ordered one of their free sample kits, filled it up with PTH 5w30, sealed it up, and mailed it back to their lab in Indiana. Here's what came back today: 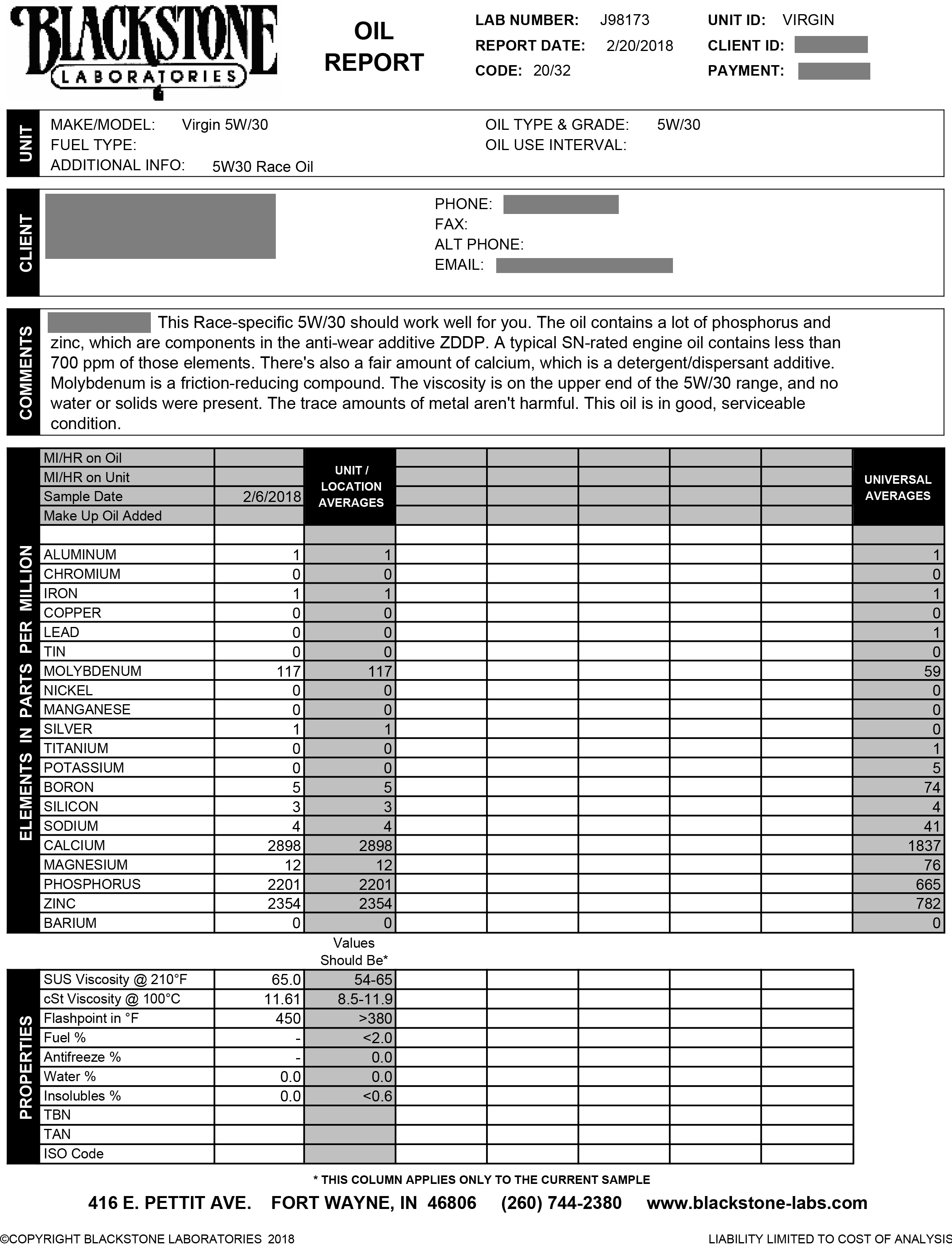 The first thing you'll notice is that I neglected to put the letters "PTH" on the analysis request form. Rest assured, this is PTH Racing Oil 5w30, straight out of the bottle I bought a few weeks ago. Not some unlabeled mystery oil that I found on the back shelf of the Studio.

The second thing you'll notice is that the properties are consistent with what PTH Racing Oil advertises on their site. In fact, the Zinc and Phosphorus numbers are actually about 10% higher than what PTH advertises. This is really impressive, because the Zinc and Phosphorus content that they advertise is already amongst the highest in their class of high performance oils. The viscosity @100C is basically exactly what they advertise (all racing 5w30 oils have a viscosity that's on the high side of the range), and the flash point is where it needs to be for an oil like this.

It's encouraging to see the comments from Blackstone. They've seen hundreds of thousands of oil samples and generally aren't prone to saying nice things about random oil that they haven't seen before. I also commend whomever did the comments writeup. People usually tell them what oil brand and make their sample came from so they can reference it against their massive database of motor oil data. By leaving three very important letters out of the request sheet, I gave them almost no reference data with which they could draw any conclusions. Yet they still did a nice job. $28 well spent, I'd say.

As I mentioned in the first look post, oil analysis is a lab test in pristine conditions. The inside of a high-revving, high-strung racing engine is a slightly different environment. That said, there are two conclusions I can draw at this point.

The first is that PTH's claims about their oil are accurate. In fact, the Zinc and Phosphorus numbers exceed their claims by almost 10%. Truth be told, this was not the result I was expecting. Additive content, flash point, and viscosity numbers usually come in lower than what the manufacturers claim, sometimes by a fairly significant margin. To have the anti-wear additives come in higher, the viscosity numbers to be spot on, and flash point to exceed their specs is a very nice surprise.

The second is that the guys at PTH were being honest when they told me that they were a bunch of experts out to make a quality product. In an industry full of superficially impressive presentations backed by hollow shell companies, these guys are a breath of fresh air.

I can't believe I'm saying this, but I'm actually excited to test the limits of PTH Racing Oil on track. Maybe I really did stumble across a diamond in the rough.

StudioVRM is not sponsored or supported by any oil companies including PTH. The oil mentioned in this post was purchased at full price out of Roger's own pocket, as was the oil analysis. At least it didn't cost very much.