Even in the 2020s, the 2nd generation Honda CRX remains a wildly popular chassis for track and race cars. And it's easy to see why:

The CRX is one of the few easily attainable cars with a ~2000lb curb weight with an engine bay that can accommodate a myriad of engine swaps and a still-strong aftermarket that is still producing new parts.

As popular as it is, the CRX chassis isn't without its quirks. The tail-happy nature of this short wheelbase car can make it intimidating for newer drivers, and some of the usual Honda suspension tricks don't seem to work on these chassis.

Fortunately, we at StudioVRM have developed a fairly deep understanding of these cars through years of testing with our sister team, ProjectCRX. So we thought we would share the exact suspension and specs that we use on our SCCA Improved Touring A-prepared Honda CRX Si, in the hopes that it helps those of you out there who are planning to run your car on the track: 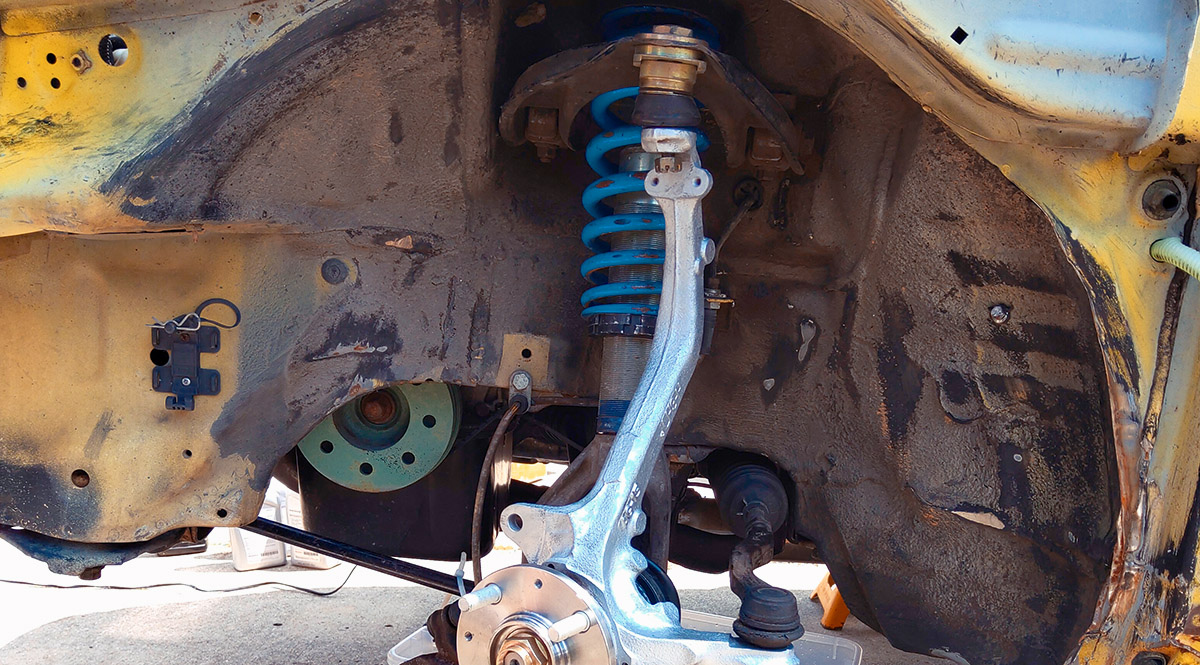 Despite what you might expect from its featherweight chassis, the 2nd gen CRX chassis works best on stiff springs. After testing a variety of different spring and roll bar combinations, we settled on 600 lbs-ft springs in the front and 800 lb-f/in springs in the rear. While this might sound extreme, the high motion ratios of the stock CRX suspension mean that these translate to only 400 to 500 lb-f/in at the wheels. This is very mild for a dedicated track car.

On the flip side, we found that stiff anti-roll bars make the car snappy and unforgiving over tall kerbing, even with near-stock spring rates. In the end, we found that the best balance between speed and driveability involved using no front anti-roll bar and a stock Honda CRX Si rear anti-roll bar.

On most cars, you can get away with using sub-optimal dampers and still punch out fast lap times. Not so much with the CRX. A set of good race-valved shocks with plenty of midrange compression damping is paramount for a fast and forgiving CRX.

Fortunately, there are plenty of options out there for this chassis, as coilover kits from other small Hondas all the way up to the EG Civic fit on these cars with very little modification.

We use double-adjustable DMS 50mm rally dampers, as used on the ReidSpeed Civic prior to their Fortune Auto partnership. We had to shave some bushing material from the rear lower control arm in order to make them fit, but otherwise, they are a bolt-on application.

Unfortunately, DMS Australia is no longer making racing dampers, so these kits are difficult to come by. If we were to build a new CRX racecar in 2020, we would look towards one of the following kits as an alternative:

If the budget isn't there for a good set of race dampers, we would recommend sourcing a used set of Tein Basics (the old rebuildable version) or Tein Street Advanceds (again, the rebuildable version), get them revalved for the rates that we need, and look for some used Hyperco, Swift, or Eibach race springs to put in them.

Aligning a CRX for the track is one of the most counter-intuitive processes on the planet. Many drivers copy alignment specs for a later model Honda and find their cars twitchy and difficult to handle. This is partly due to the short wheelbase and short overall length of the car, and partly due to the exaggerated bump steer in the front and rear suspension. A fast CRX alignment is one that makes these quirks manageable, and that usually leads to some unusual looking results.

For example, we recommend skipping the usual front toe-out that you find in most FWD racecars and opting for a very small amount of front toe-in. This counteracts the tendency for the CRX front suspension to bump out under braking, making the car much more stable during hard braking and turn-in.

We also recommend running significantly more camber in the rear instead of the front. This is the opposite of what most racers (including yours truly) recommend for FWD track cars, as it can give the rear end too much grip and make it difficult to rotate the car mid-corner. Because the CRX is naturally so eager to rotate mid-corner, we recommend adding the extra camber to the rear to stabilize the car instead.

So what does this mish-mosh of seemingly backwards alignment settings give you?

Here's the full set of alignment specs for our ProjectCRX:

The aggressive camber settings are specifically for DOT R-Compound tyres, which work best with 2 to 5 degrees of negative camber, depending on brand. For street tyres, we recommend running reducing the front camber to -2 degrees and the rear to -3 degrees.

And lastly, the most important piece of the puzzle, tyres. The gold standard tyre for track-driven Honda CRX's is still the Hoosier A7. The soft "A" compound makes the car less tail-happy through the first cold laps of the day, and they bring out the best of the CRX's razor sharp handling once they come up to temp. These cars are light enough that you can race on them for a 30+ minute sprint race without overheating or stripping away the tread.

How does it handle?

So how does a car with this setup handle in the real world? Take a look at this in-car camera footage from ProjectCRX's last test day, where we used the exact setup described above:

As you can see, the car is very mild and easy to handle. Despite ice-cold track temperatures in the 36-to-40-degree (F) range, there is none of the tail-happy oversteer that people expect from a typical Honda CRX. The car doesn't wander on the straights like some fast CRX track cars, and it still maintains that sharp, responsive cornering that makes it one of the fastest cars on track through the Lightning circuit's twisty turn 2-5 complex.

Thank you to the many friendly CRX racers of the SCCA who shared their setup tips with us, as well the drivers of ProjectCRX.Racing, who patiently tested some truly abominable handling setups as we trialed and errored our way to these settings.