About a month ago, we conducted a head-to-head comparison between two popular chemical rust removers, with some very surprising results. Then the whole excitement happened around current events, and we kind of forgot about the samples. By the time we got around to cleaning up our workspace, our three rusty brackets had been soaking in their rust remover baths for an entire month.

So we thought it would be a good opportunity to turn lemons into lemonade and use these neglected samples to test a claim touted by both manufacturers - That these rust converters won't damage clean metal.

While it might seem like a minor point, it is actually something worth testing. After all, both of these solutions are more expensive than some very common rust removal products. For example, muriatic acid and media tumblers can also do a very good job of removing corrosion from ferrous metals at a fraction of the price. The problem is that they need to be watched carefully. Leave your corroded parts in too long and they might end up eroding away some of the precious good metal underneath.

The value behind products like Deox-C and Evapo-Rust is that you can literally "set and forget" them. So let's test to see how true those claims are.

How is this Even Possible?

This does raise the question - What makes products like Evapo-Rust and Deox-C so special that they can even make such a bold claim?

The secret to achieving this non-destructive rust removal is a chemical process called chelation. Chelation is a chemical process that involves using an agent which binds to a metallic agent and separates it from the surrounding materials, not unlike the way soap binds to grease and oils. It's the same principle behind how a household water softener works, and is the same technique used by hospitals to treat patients with heavy metal poisoning.

There are a wide variety of chelating agents out there, and the art is picking the correct one for the application. Choose the wrong one, and it may end up disintegrating your work pieces instead of cleaning them. What this means is that this experiment is really a test of how whether these manufacturers did their homework in selecting their chelating agents, and how well they did in selecting the right chelating agents to do the job. 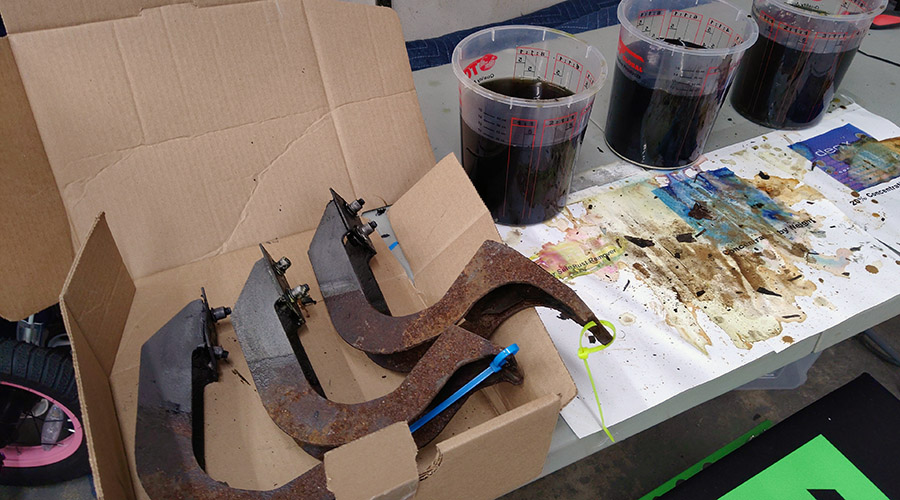 By the time we wrote this article, our three work pieces had been soaking in their rust remover baths for a full 30 days. In order to preserve the condition of the work pieces, we only gently wiped the brackets down with a dry paper towel and before bringing them to the workbench for a closer visual analysis.

The work piece soaked in Evapo-Rust looks quite similar to when it had been in the rust remover bath for 24 hours. There is some noticeable pitting as well as some mild etching in the cleaned area, but the brackets do not seem to be any thinner or more brittle than they were when we filmed our comparison.

Thanks to the effects of evaporation, all three samples have a band of de-rusted metal that ended up being exposed to the air for an extended period of time. This band of exposed metal is clean and nearly rust-free on the Evapo-Rust sample. It seems that Evapo-rust has an additive that prevents flash-rusting: A convenient feature for when you aren't able to seal and paint your work pieces right away.

The 5% Deox-C solution seems to have produced similar results to the Evapo-Rust, with some subtle differences. The pitting on the clean end of the bracket is less pronounced than with the Evapo-Rust solution, and the etching of the metal is very slightly less noticeable. However, the exposed band of metal near the untouched rusted portion had clearly flash rusted and is starting to corrode again.

This is an indicator that you should immediately wash, prep, and seal your work pieces immediately after removing them from a Deox-C bath. If you are working on large work pieces, this is also an indicator that you should have enough extra liquid to keep your parts submerged, just in case some of it happens to evaporate out of the top of the container.

What is surprising was the extremely even etching on the freshly cleaned surfaces. We expected more pronounced surface etching on this sample compared to the others, as the Deox-C is very slightly acidic. As with the 5% Deox-C solution, the band of exposed metal on this sample also showed signs of surface rust, though not to the extent of the 5% solution. 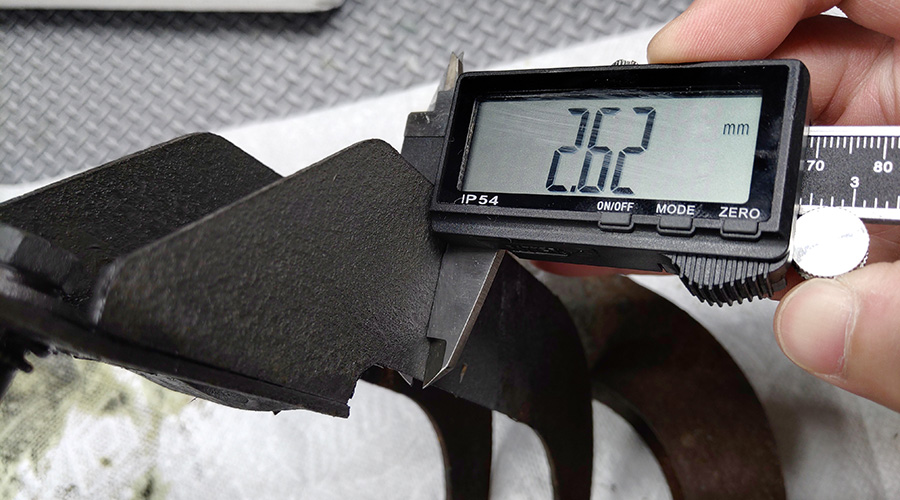 Because none of the samples showed significant amounts of erosion, we broke out the digital calipers and measured the thickness of the brackets to see how material had been dissolved. We took multiple measurements of the freshly cleaned sections, the cleaned portion that was exposed to open air, and the original rusted section to see how the thicknesses of the brackets changed.

In order to get the most accurate results possible, we took four different measurements of each section and averaged them together. Here are the results:

From these results, we can see that Evapo-Rust and Deox-C do live up to their claims of being safe for ferrous metals. While the process removed almost 1 mm of material from the original rusted brackets, we can see from the exposed sections of metal that the majority of this was rust and scale. The extended rust remover bath seems to have done little to affect the thickness or integrity of the clean metal within these rusty brackets.

The biggest surprise of this test was the 20% Deox-C solution. We expected that the high concentration of powder would have eaten into the metals significantly more than the others. Our results showed that this was not the case. On top of this, the 20% Deox-C solution gave us the best results in the visual test, producing the least amount of metal pitting and the most even surface of our three samples.

The added silver lining for us here is that it does seem to be possible to turn lemons into lemonade... Even if they have been abandoned in the garage for an entire month.

StudioVRM is not affiliated with Evapo-Rust or Bilt Hamber. All products were bought out of Roger's own pocket at full price so we could do these tests.