If you've watched or followed any racing series, you'll hear teams and commentators alike talking about "developing" their racecar as the season goes on. But what does that actually mean? Most racing games depict the process of developing a racecar using a modern-looking tech tree, where you can give virtual engineers a bunch of virtual currency so they can make your car accelerate harder, stop quicker, and corner better as the season progresses. It gives you the impression that you're investing R&D dollars into a team of researchers who are constantly inventing and building new parts that your mechanics will bolt onto the car. And while there is an element of truth to that for some well-resourced teams, it's far from reality for most racers.

The Reality of the Matter 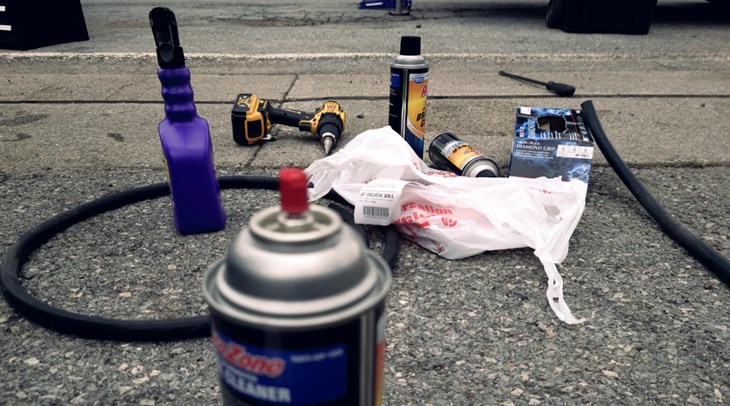 The reality for most drivers and teams is that we don't have hundreds of thousands of dollars to invest in new parts over the course of a season. For many of us, the parts that we have on the car at the beginning of the season are what we plan to finish the season on. And aside from a lucky few, most of us lack the tooling or the skills to fabricate new parts in the comfort of our own shops.

And yet, budget-minded racers like us still find ways to make our cars faster over the course of the season, sometimes by a factor of seconds per lap. So how do we do it?

In this series, we will take you behind the scenes as we develop the StudioVRM Honda Prelude through a competitive 2022 US Touring Car Championship season. In the process, we will you what actually goes on when we "develop" and "upgrade" the car, and hopefully give you some inspiration on how you could approach the development process for your own track or race car.

The key to a successful development program is organization. All of your findings and data will come from your time on track, but most of your actual development work will happen away from it.

That means you need a way to collect accurate data in a quick, efficient way, and have a way to keep it organized so you can review it later on. Our at-track data toolbox includes:

Since yours truly has a penchant for losing paper notes, our race engineer has mandated that all team notes are kept on Trello, a free-to-use cloud-based task management platform. 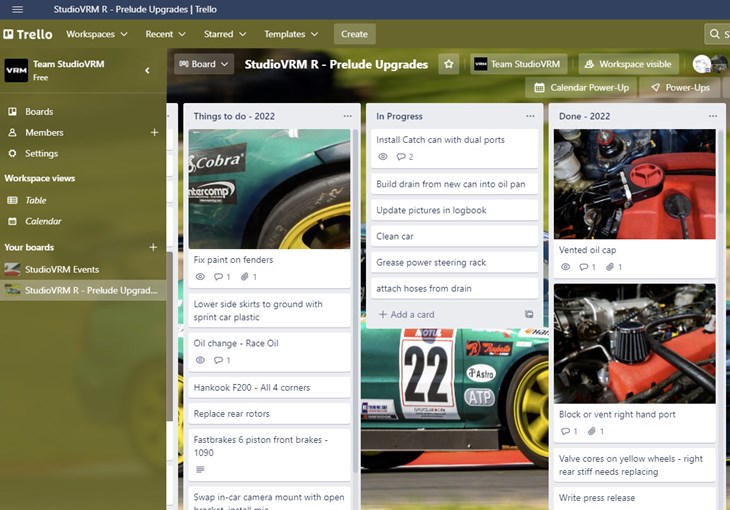 Trello is an electronic Kanban board. It lets you track tasks in small, short notes called Cards, that you can quickly drag and drop between a series of Lists to indicate the status of the list. We have two Trello Boards in our Workspace, one that shows the list of upgrades and changes that we need to make to the car, and another that helps us keep track of observations and findings at each event. This second board also acts as our pre-event packing list, which helps make sure that we don't forget to pack something. Very handy.

All of our team members have the Trello mobile app installed on our phones so we can collect, share, and review our notes before, at, and after each race weekend.

On-Track Data Logging on a Budget 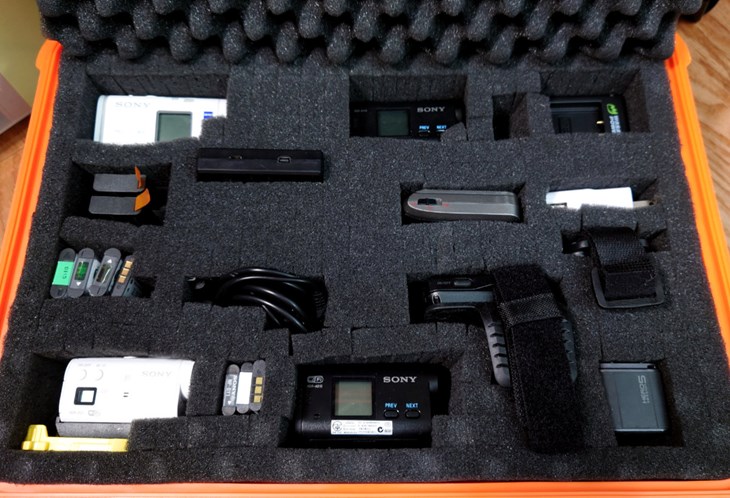 Our team budget doesn't allow for expensive data loggers, so we do things the old-fashioned way - With cameras. Over the years, the team has amassed a small collection of second-hand Sony Action Cams, and we always try to install at least two of them whenever we go out on track:

Our cameras may be several generations old, but they are still capable of producing clear 1080p60 footage. The video footage that we get from these little guys provide invaluable data that we can go back to see exactly what the car and driver are doing.

As for lap timing, we use the RaceChrono Pro mobile app, installed on a used Android phone. We attach it to the roll cage on a RAM X-mount to use as an in-car lap timer and to collect speed / position data that we can review later on.

If our car had an OBD II port, we would have also purchased a budget-friendly OBD data logger to collect data from our Honda's in-car systems. Unfortunately, our car lacks the sensors or the computer for these functions, so it isn't an option for us. There are also some areas where you have no choice but to have dedicated tools. This is the one area where I would recommend spending a little extra money to get the best possible tools.

At minimum, you will want to have the following on hand so you can collect valuable data about your car's tyres:

We do bring a travel case of portable alignment tools to the track, but those tools are for checking and fixing our toe or camber in case of a handling problem. We rarely have a need to use it during a race weekend. 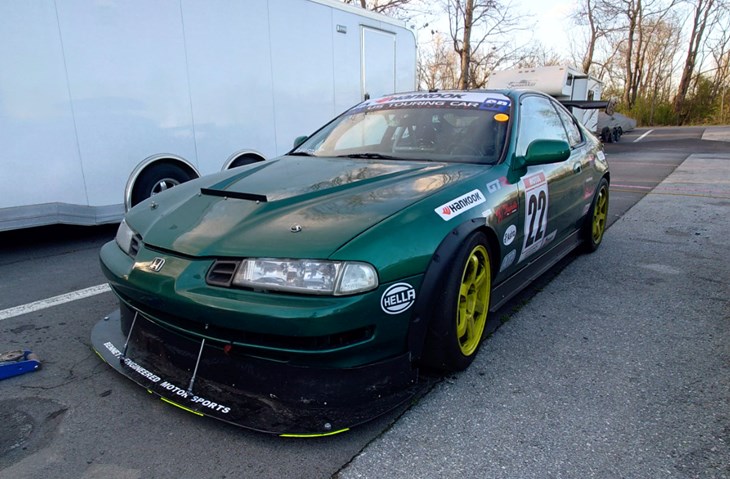 Now that we have our tools, it's time to set a baseline for the car so we know what we are working with.

This means having a rough idea of the car's power, weight, alignment, tyres, and (if available) average lap times from past events that you can use as reference data.

For us, that baseline data was:

Due to time and budget constraints and an over-supply of slicks, we decided to start the 2022 season on used hard compound racing slicks, then switch to new Hankook F200 medium compound slicks before the second round at NJMP. We knew that would affect some of our tyre and alignment related measurements and could hamper the development of our alignment and suspension setup. But that was ok. We had other things to worry about at the first race. 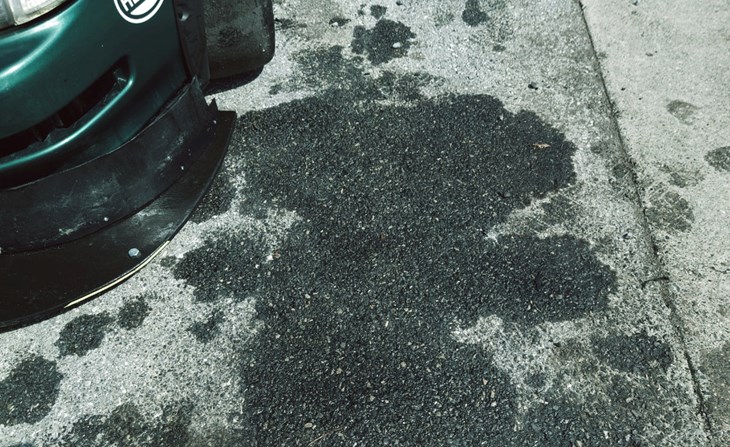 In our case, there were still question marks around whether our engine was fully broken-in after its last rebuild. Despite being to the track seven times since its last rebuild, mechanical issues meant that this motor had less than 2 hours of total running time on it. We had performed some last-minute break-in before the event, but we weren't confident that the piston rings had fully seated just yet. In addition to the engine being slightly down on power, this also meant that we would need to keep a close eye on the oil catch cans attached to the Prelude's crankcase breathers.

We were also concerned about the tracks that the series was going to this year. It has been years since we had raced at Summit Point or Pittsburgh International Raceway, both of which had been repaved and modified several times over the course of the past decade. Because we had no idea about the surface or the new kerbs, we would need to be conservative with settings like our ride height and spring rates. If our car was too stiff or too low, it would be difficult to fix at the track. That means running the car higher and running softer springs, and a compromise of speed vs drivability.

Finally, there was the driver. While yours truly has a reputation of being a safe pair of hands behind the wheel, it has been a few seasons since I have been able to fully immerse myself in the heat of a lengthy dogfight. It would take an event or two to shake off the rust and get used to fighting again, and that means focusing on small, incremental changes while the driver re-learns how to race at the limit.

With our baseline and weaknesses accounted for, it's time to build a plan. We like to categorize our development plans by area and set tasks and goals on a race-by-race basis. Our development plan for our first test & race weekend at Summit Point included the following items in each category:

On to the First Race 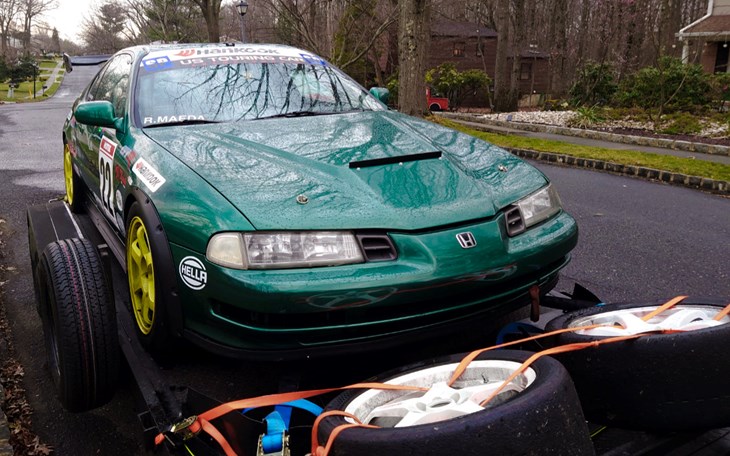 With plans in place and the rig loaded, we were ready to head to our first race weekend of the year at Summit Point Raceway. How did our plans fare against the track test that stood ahead of us in the rolling hills of West Virginia?

Find out in Part 2 of How to Develop a Honda Prelude Racecar.

In the meantime, I'll see you at the track.