When we left off at the end of Part 3, we had just finished celebrating our first race win in over a year. But this was no time to rest on our laurels. The next two rounds of the season would be at Pittsburgh International Race Complex (AKA PittRace), home track to our main competitor Coyote Black. If we were going to stand a chance of being competitive, we would need to start working on our next set of upgrades.

PittRace is a long, fast track best known for its elevation changes and quick left-right transitions. Racers often say that you need to "hustle" or "throw" the car through most of the corners to get a fast time around the track. With that in mind, we prioritized the upgrades that would have the biggest impact while still giving us the long-term performance that we needed. 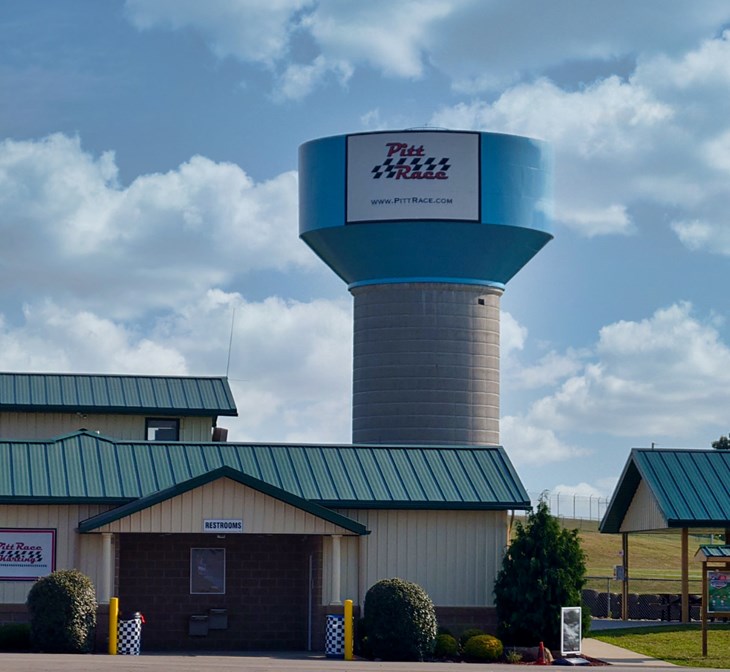 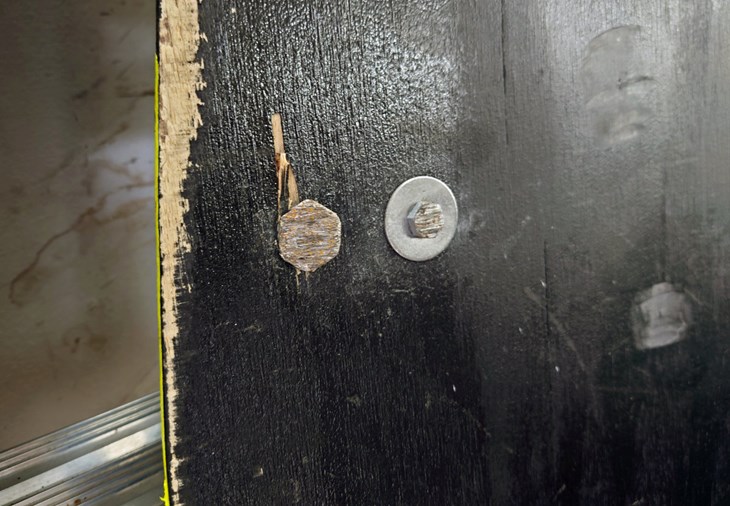 PittRace is a track with a ton of fast-changing elevation changes. We knew that we would need to raise the Prelude's splitter a few extra millimeters to avoid the ground-scraping antics that we put on display at NJMP. With that in mind, we raised the splitter by 20mm by trimming the splitter moutns and bolted them higher up on the chassis. 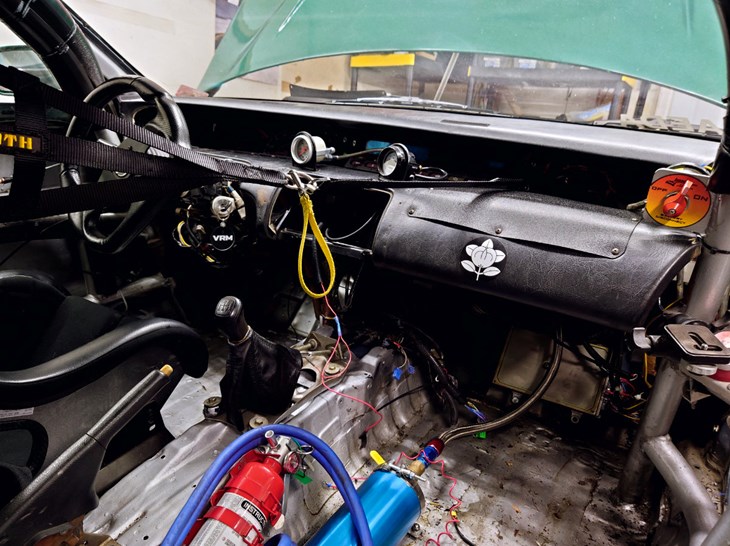 We also wanted to remove some weight from the car to help it handle the quick left-right transitions a little better. Fortunately for us, we knew exactly where to find it. The StudioVRM Prelude still had its heater core and dash pad reinforcement from the days when we were competing in the more rules-bound SCCA Improved Touring class. Since the USTCC allows for the removal of both of these components, we happily set to work.

We used a Sawzall and cut notches into the dashboard to free it from behind the front legs of the cage, removed the heater core, unbolted any unused metal brackets, and hole sawed out as much hard plastic reinforcement out of the dashboard as we could. This work alone removed almost 45 lbs (20.4 kg) from the firewall of our Prelude. The surgery left the passenger side of the dashboard a little floppy, so we zip tied those pieces to the roll cage to keep them in place. 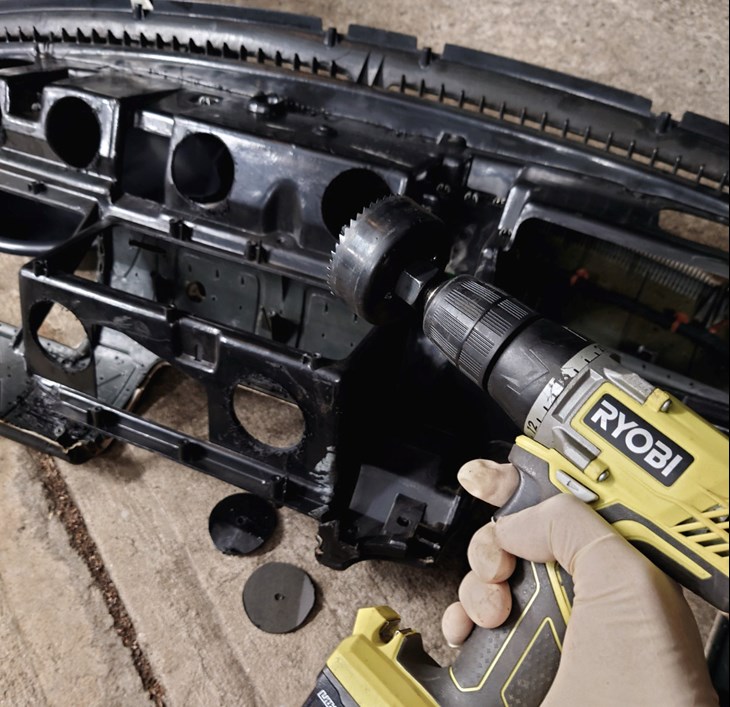 Quick transitions means that we would need more rear end rotation. At NJMP, we discovered that the tiny sliver of toe-out that we put on our rear wheels wasn't enough to get the car to dance through the turn 3-4 complex like we wanted. So for PittRace, we decided to dial in a little more, going from 0.1 deg toe out to 0.3 deg toe out (or approx. 1/8" total toe out on our Longacre toe arms). While this might sound a bit extreme for a road race car, it's not out of the question on a super sticky full slick like the Hankook F200. 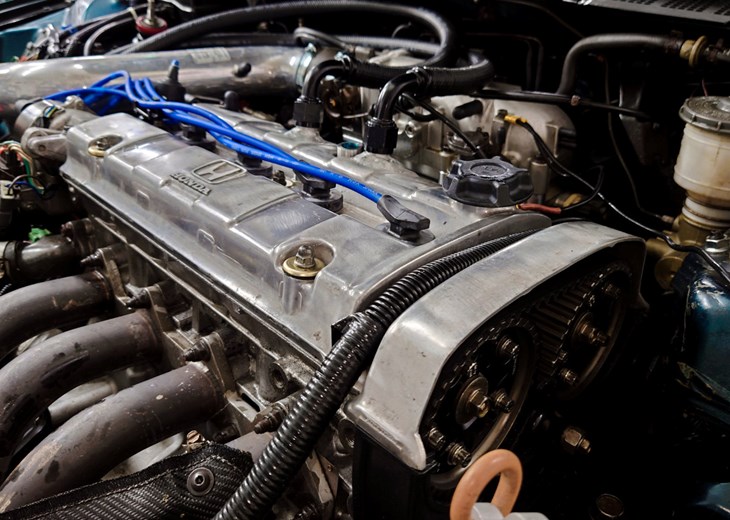 While the PCV and blow-by issues had become much less of an issue at NJMP, we knew we could do better. With the help of Martin Szwarc's welding skills, we disassembled a spare H23A1 valve cover and welded in two AN-10 ports near the rear. Unlike the vented oil cap, these ports would be protected by a steel baffle that would keep any oil that was slung off the spinning camshafts from being sucked into the catch can. We then reinstalled the stock oil cap and routed the lines to the new ports. 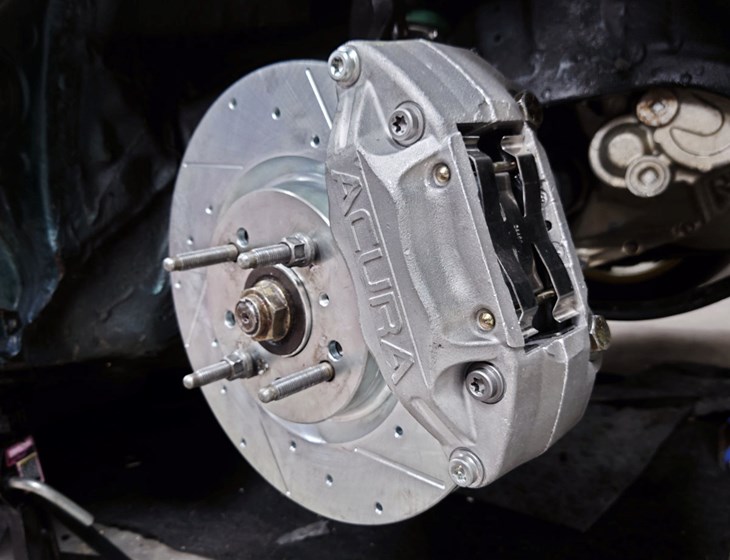 While reviewing the rear-view camera footage from NJMP Lightning, we noticed that our competition would get several car lengths closer every time we entered the hard braking zone into turn 7. We knew exactly why: We never pushed the brakes to 100% of their capacity. The reason? Heat.

Between the super sticky race slicks and the tremendously effective aero, we were worried that the front brakes would overheat over through the course of a 25-lap race in the mid-summer heat. It was time to move up to a caliper and rotor that could handle the heat.

After reviewing a few options and looking at the precious remaining funds in our team's budget, we decided to upgrade to an Acura RL-based big brake kit manufactured by FatFour Customs. This kit combines the beefy 4-piston fixed calipers off of a 2005 Acura RL with the 325mm front rotors from a 350Z, using a combination of redrilling and hubcentric spacers to adapt the enormous 5 lug rotors to the 4th gen Prelude's stock front spindles.

This affordable OEM+ kit was perfect for us. It would give our overworked front brakes the heat capacity that they needed while working perfectly with our stock 1" Prelude Si 4WS Master Cylinder. At only $600 US for the set (including the cost of RL calipers but not including the cost of pads) and weighing only 14 lbs (6.35 kg) more than the stock Prelude VTEC brakes, it was well within the constraints of our budget. And best of all, they completely filled out our 17" race wheels, giving the car a show-stopping, aggressive look. 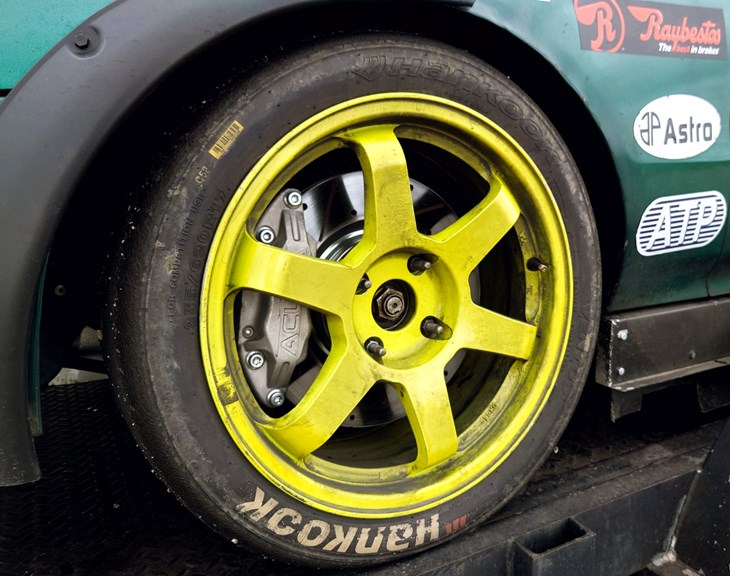 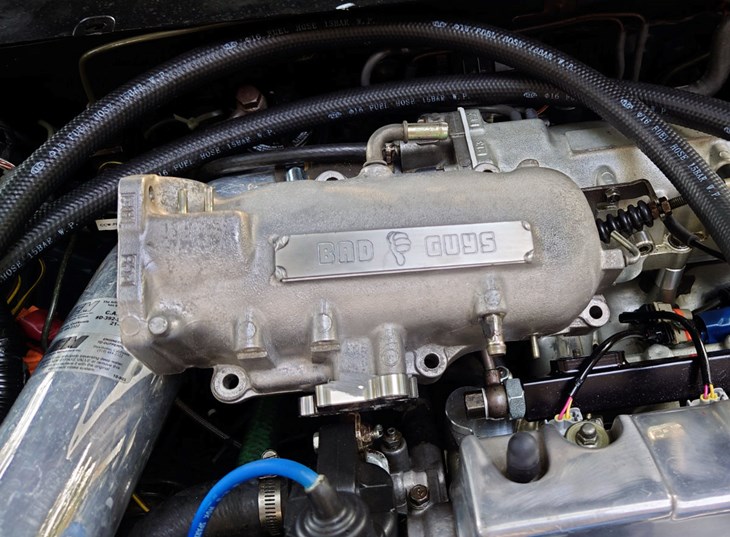 The one snag in our pre-Pittsburgh planning was that we couldn't get a dyno tuning session with Evans Tuning in time for the race. This was a bit unfortunate, as our new Technical Partner, The Bad Guys, had just sent a new Intake Manifold upper plenum that would let us replace our stock 60mm throttle body to a gargantuan 74mm unit. But given all of the other upgrades that we completed on the car, maybe this wouldn't be the worst thing to happen to us this season. We would just have to defer these upgrades until next time. 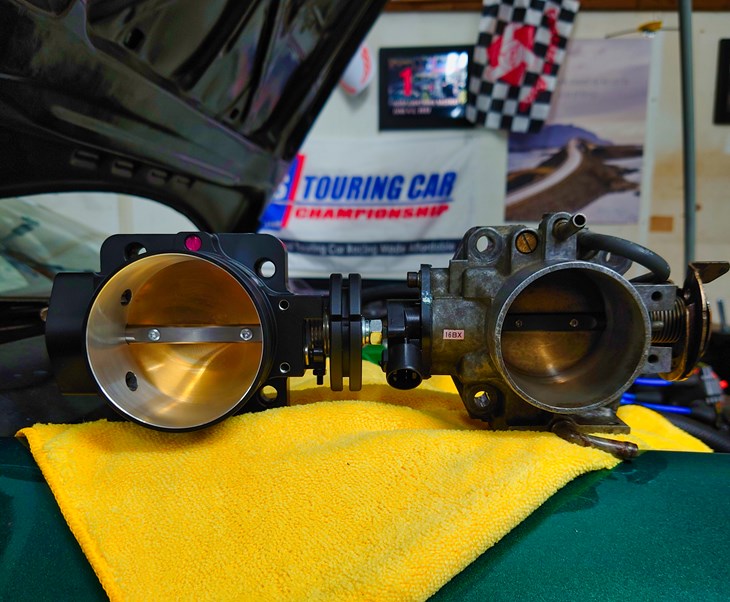 A Sudden Stop to Festivities

Given that it has been almost 10 years since our last trip to Pittsburgh International, the team made the decision to arrive at the track a day early and participate in the Friday track event, both to shake down the car and learn the track.

Our driver pounced at the track from the very first session, familiarizing himself with the fast and twisty North Course and testing the effectiveness of the new parts, when suddenly, this happened:

While powering out Pittsburgh International's slow Turn 11, the H23 engine in the StudioVRM Honda Prelude hesitated slightly before filling the cabin with ashen smoke. We limped the car back to the pits in 4th gear.

We didn't have many engine troubleshooting tools in our travel toolkit, but thanks to the help of ProjectCRX's Martin Szwarc, Savage Garage Racing's Coyote Black, and one IndyCar, NASCAR, and IMSA Crew Chief Jim Locke, we managed to do some improvised at-track troubleshooting. The prognosis was not good.

Cylinder #1 had spark and fuel, but zero compression. A closer look at the #1 spark plug revealed specks of metal covering the ceramic at the bottom of the plug. When Jim borrowed a leakdown tester and used his own lungs as an improvised air compressor, we saw air escaping from the PCV ports. Air was getting past the piston rings, into the oil pan, and right back up the valve cover. In Jim's words, the engine "was definitely injured." There would be no racing for us that weekend. 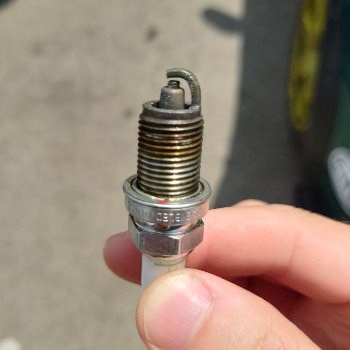 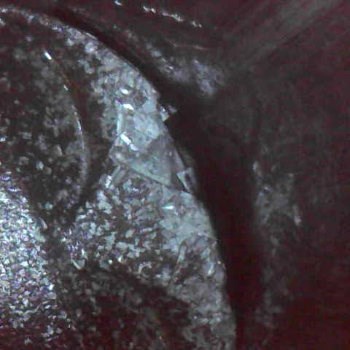 A borescope analysis of the cylinder confirmed our worst fears - Two big chunks were missing from the piston on cylinder 1, and the piston top was pitted heavily from metal flying around inside the combustion chamber. The H23 race engine that had carried us to victory just two short months ago was now thoroughly broken.

Making the Most of the Data

Despite having an extremely truncated track schedule, we were still able to gather some valuable data on some of our latest upgrade package:

Raising the height of the splitter dramatically reduced the amount of contact that our aero kit made with the ground. That said, it wasn't quite high enough to clear the ground at a handful of spots on track - The leading edge of our splitter blade still hit the tarmac at a few points, such as the turn-in for the slow uphill turn 10. We might consider raising the splitter another 5-10mm for next time just to make sure that we won't damage the splitter blade over the course of a race.

Increasing the rear toe-out to -0.3 deg worked remarkably well. This change allowed us to swing the rear end of the car around through slower turns without causing the rear end to slide out through the faster turns. We will be keeping this setting change as part of our base alignment going forward.

We were pleasantly surprised to find that the FatFour Customs RL brake kit worked exceptionally well. We were admittedly slightly worried about how the huge 4-piston calipers and oversized rotors would perform. But it turned out that this kit, combined with Raybestos ST-45 brake pads, was just what we needed to maximize the braking system of our racing slick-shod car.

The brake pedal had noticeably less travel than when we were using the OEM Prelude VTEC brakes, due to the fact that the 350Z front brake rotors are a full 2mm thicker than the OEM Acura rotors that the RL calipers were designed for. As a result, we found it much easier to keep brake harder without locking them up completely. We will need to do some endurance testing to see how they hold up over the course of a longer race. 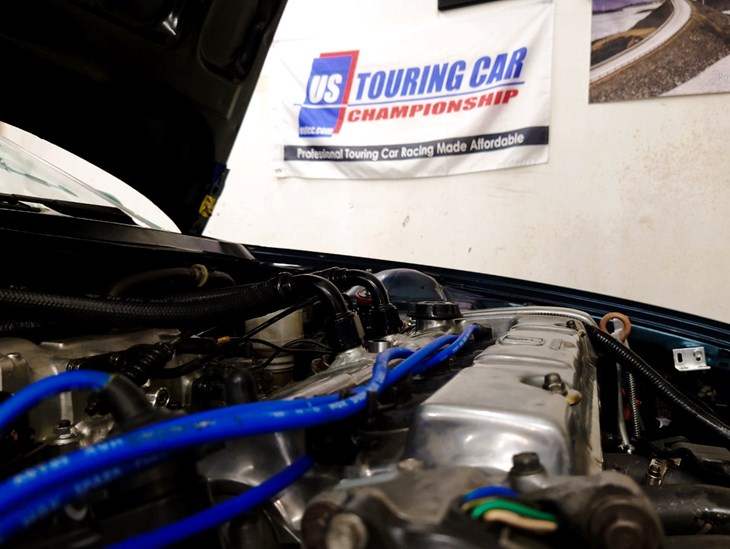 What do you do when your entire program is suddenly knocked off track? Pick yourself up, assess your options, and figure out what it takes to get going. If you have any friends or contacts in the racing community, it's time to pick up the phone and start asking for help.

Thanks to the support of our friends, technical partners, the USTCC, SCCA, and NASA racing community, as well as the generous outreach of fellow Honda Prelude racers, the StudioVRM Prelude won't be down for long. We even had a few particularly generous friends offering their spare blocks and heads just to see if we could get back on track. ProjectCRX's Martin Szwarc even offered to lend us the entire K-series powertrain out of his FD2 Civic Si.

While that offer was slightly too generous for us to accept, we now had a myriad of directions in which we could go:

In the meantime, we reached an agreement with another Prelude racing team to acquire two complete H22 race engines. One of these engines will propel our USTCC Prelude into the coming 2023 season.

The StudioVRM Prelude will be back soon, and our quest for speed will continue. In the meantime, we will see you at the track.

The Bad Guys (AKA Bad Guys Worldwide) joined StudioVRM's racing arm, StudioVRM.Racing as  Technical Partner in August of 2022. The new intake manifold upper plenum mentioned above was received at a discount as part of our ongoing collaboration. All other parts were purchased at full price out of Roger's own pocket.