A few months ago, we started a long-term test of Steel Camel Thread N Post, a unique anti-seize that claimed to protect fasteners and electrical terminals from corrosion in the harshest of environments. Today we'd like to check in and show you how the tests are going, and our observations so far, starting with Test 2 - The Water Resistance & Wash Test:

Good catch. The answer is that the test pieces haven't corroded enough for us to do a meaningful test. While we saw visible changes and (sometimes heavy) corrosion in all our other tests, the brake rotors only showed signs of light surface rust. So we decided to put the test pieces back into the ground for a few more weeks before we un-torqued them with the torque meter.

The water resistance test was our way of measuring how well Thread N Post protected an exposed metal surface to rain, humidity, and the elements. We ground the paint off the hitch mounting pad of a steel trailer, separated it into quarters, and painted three of the corners with anti-seize. 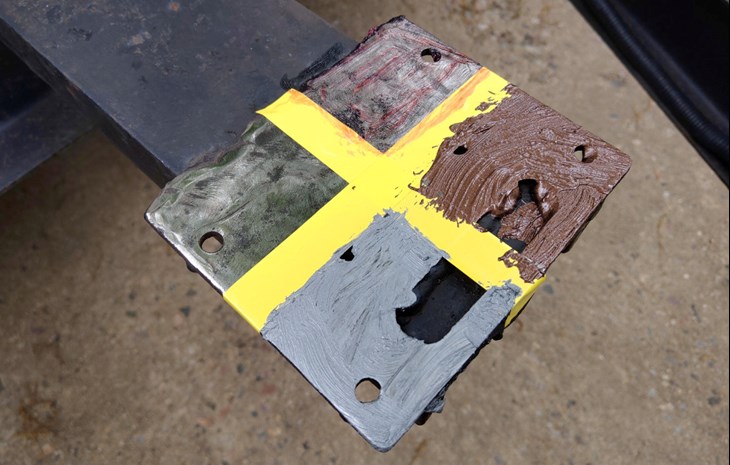 As a reminder, here's what the test plate looked like three months ago, at the start of this test. The top left corner is exposed steel, the bottom left was coated with Permatex Aluminum anti-seize, the bottom right with 3M Copper anti-seize, and the top right with Steel Camel Thread N Post.

After 2 Months of Sun, Rain, and Humidity 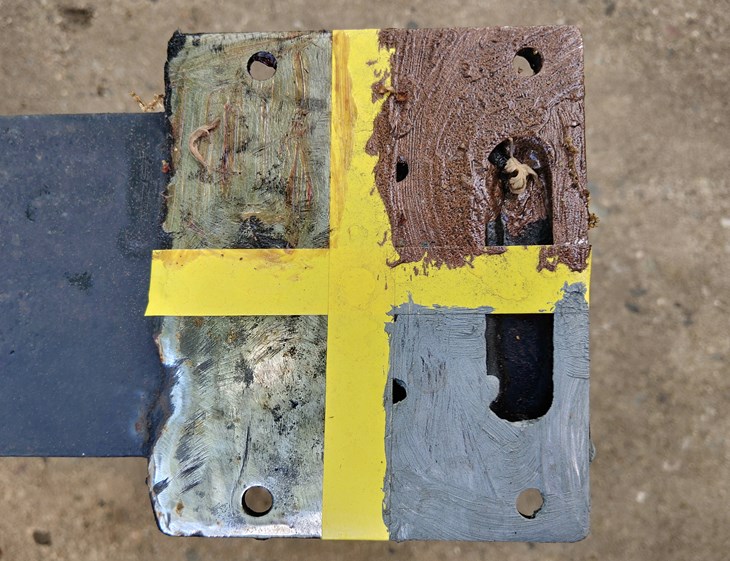 You can already see there is some light corrosion on the untreated control pad on the top left corner of the hitch plate. There is also some rust forming under the aluminum anti-seize. Upon closer inspection, we found that the heavy spring rain had washed away the grease in the aluminum anti-seize compound leaving just a crusty layer of aluminum powder to protect the metal beneath it.

The Steel Camel Thread N Post had lost its bright magenta color due to sun exposure, but it seemed to have retained both its texture and its water resistance. There was no rust under the translucent surface, and it was still slick to the touch. The 3M Copper anti-seize also seemed to be doing well, although a few large water droplets had clearly penetrated the surface. We fully expected this these spots to rust over time.

After 3 Months of Sun, Rain, and Humidity 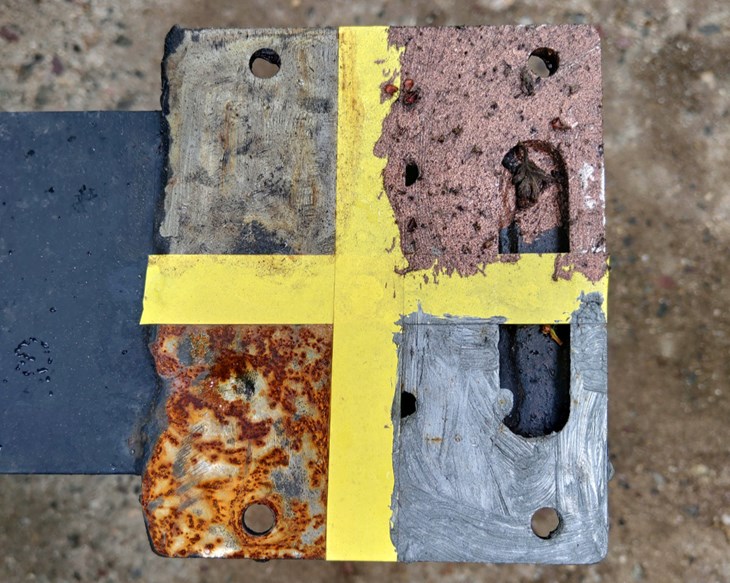 Once a piece of metal starts rusting, you can expect it to spread very quickly. That's what happened here. After three long months of open exposure to the atmosphere, the unprotected quadrant of the test panel was thoroughly pitted and covered by rust. The aluminum anti-seize panel had rust spots under the aluminum powder, while the small spots of rust started forming in the copper anti-seize where raindrops had penetrated the greasy surface.

The only rust-free panel in our test was the top left one coated with the thin layer of Steel Camel Thread N Post. Despite being a lower viscosity and less tacky than the more common anti-seize compounds, it protected the mild steel plate perfectly when the others failed. So even though this was meant to be an interim report, we are comfortable declaring Steel Camel Thread N Post the clear winner in water resistance.

When we first set up these tests, we put a layer of Steel Camel Thread N Post and Copper anti-seize on the forward-facing skid plate of our team's tow vehicle, the StudioVRM FJ Cruiser. Then we drove it day in, day out for a full 90 days to see how much dirt and grime the Thread N Post picked up compared to regular Copper Anti-Seize.

As a reminder, here's how the skid plate looked when we started the test: 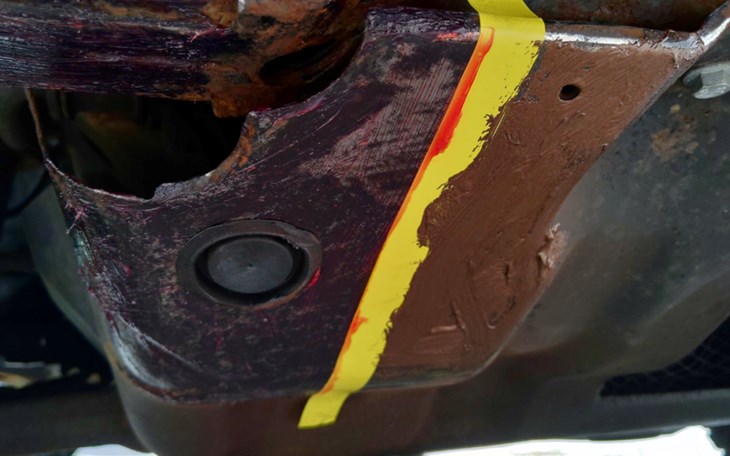 After 3 Months of Commuting 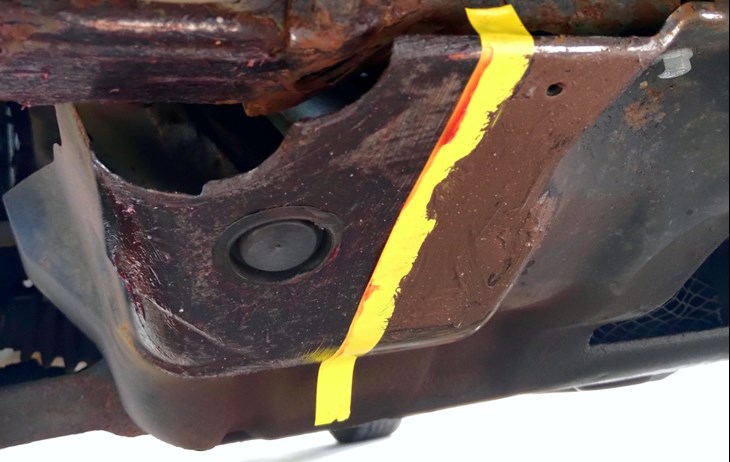 The good news is that neither the Thread N Post nor the copper anti-seize degraded into black tar regular automotive grease. While both test plates picked up some small rocks, the rain and debris from our local highways failed to penetrate the protective layer of either of the two anti-seize compounds. A visual inspection showed no rust in the areas where the anti-seize was applied.

The one difference we saw in this test was that the grease in the 3M Copper Anti-Seize had dried up, due to being exposed to a constant 30-60mph breeze from our roadgoing trips. Anti-seize compounds lose their effectiveness when they dry up like this, so over time we expect this will result in some rust re-forming under the copper-coated plate. The Thread N Post had no such issues.

We will continue to test these samples through our daily trips over the coming weeks. For now though, it looks Thread N Post has a very slight edge over the 3M Copper anti-seize in this area.

Cars generate a lot of heat. It's part of the reason that cars end up with so many stuck bolts in the engine bay and near the brakes. Initially, we had planned to test the Thread N Post on the ends of the CV joints, where the anti-seize would be exposed to 700+ degree F temperatures generated by our racecar's brakes. But curiosity got the better of us, and we ended up plastering it in all sorts of places, including on the exhaust header bolts, brake hardware, and the ball joints that were closest to the brake system. 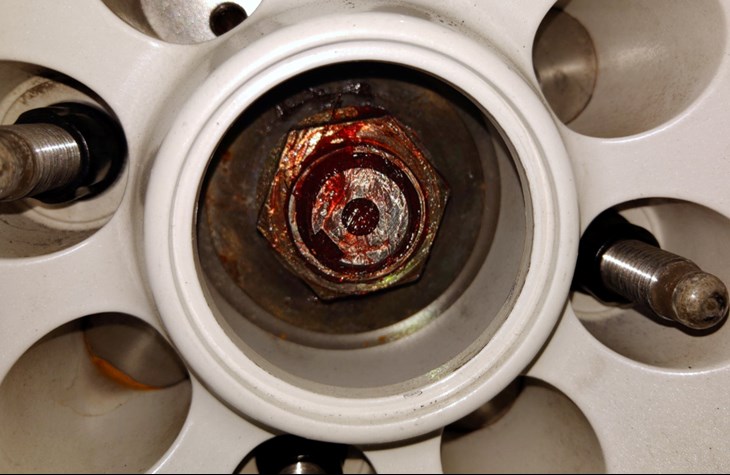 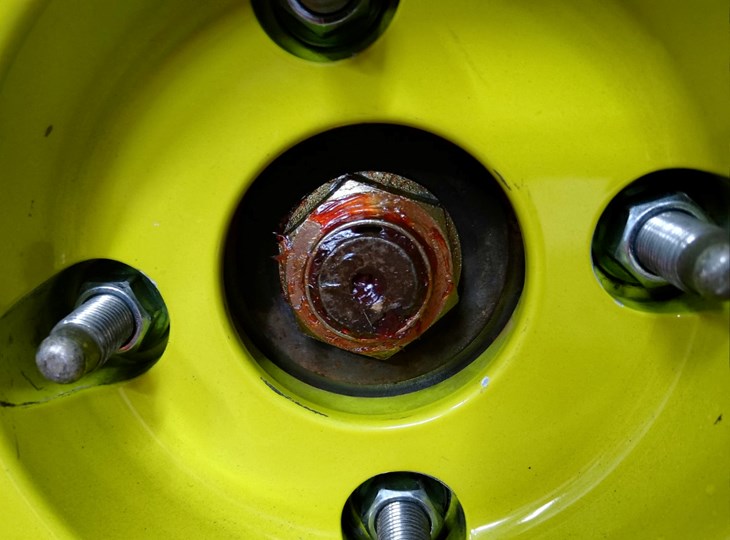 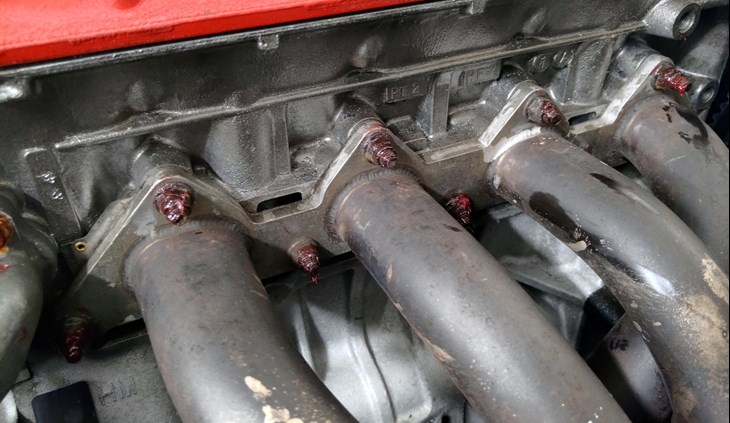 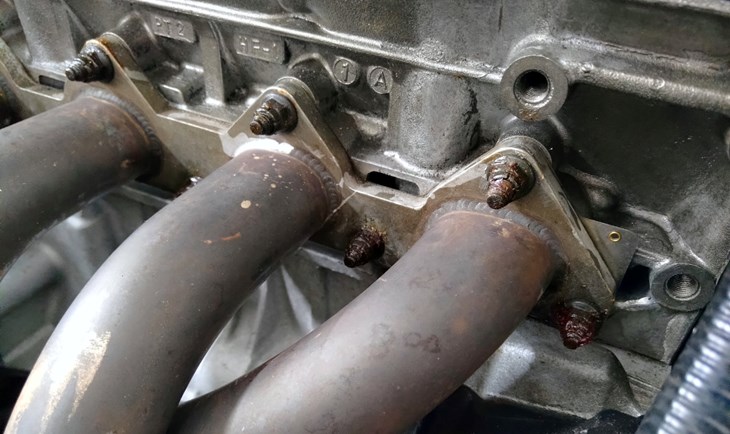 If you're struggling to spot the differences in these photos, well, you aren't alone. As far as we could tell, the only thing the heat did was change the color of the Thread N Post. There was almost no change in the texture or viscosity of the anti-seize.

The Thread N Post even retained its slick, low-tack texture despite being exposed to punishing levels of heat. Normal aluminum anti-seize would clump up and turn to dust when exposed to similar temperatures.

We left the test samples on the car and have plans to continue testing over the rest of the summer months. But based on our results so far, Thread N Post is proving to be at least as temperature resistant to Copper or Nickel anti-seize the negative side-effects of either of the other two compounds.

Results (so far): Tie with Copper and Nickel Anti-Seize

So you may be reading the results so far and thinking that Steel Camel Thread N Post might be a good all-round anti-seize to have on the shelf in your garage. While our interim results do appear to support this conclusion, this isn't the only thing that this unique rust-busting compound can do. Steel Camel claims that Thread N Post will also stop battery post oxidation like no other product out there. And as it turns out, this is Thread N Post's party piece.

A few months ago, we lightly brushed the powdery white oxidation off the terminals of our FJ Cruiser's aging batter, applied a thin layer of Thread N Post, reassembled it all, and drove the car as usual. 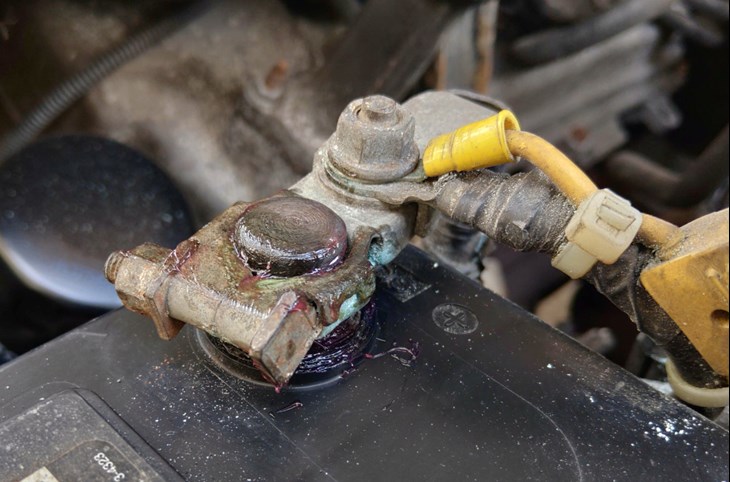 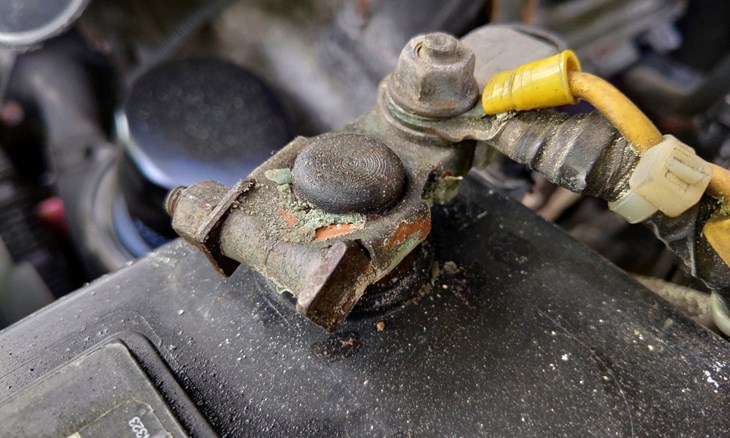 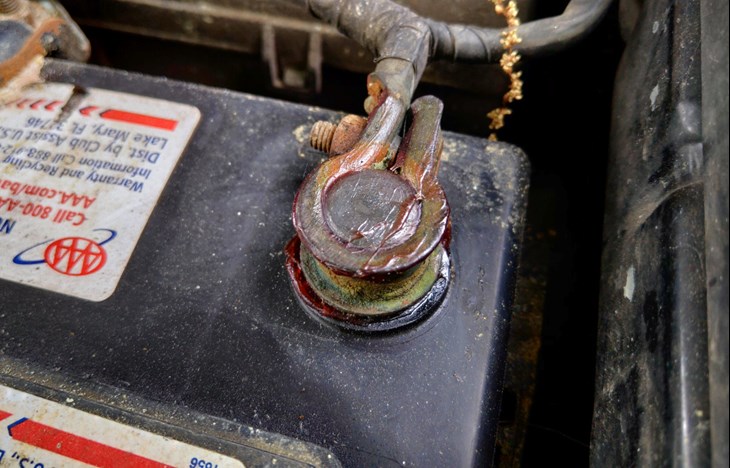 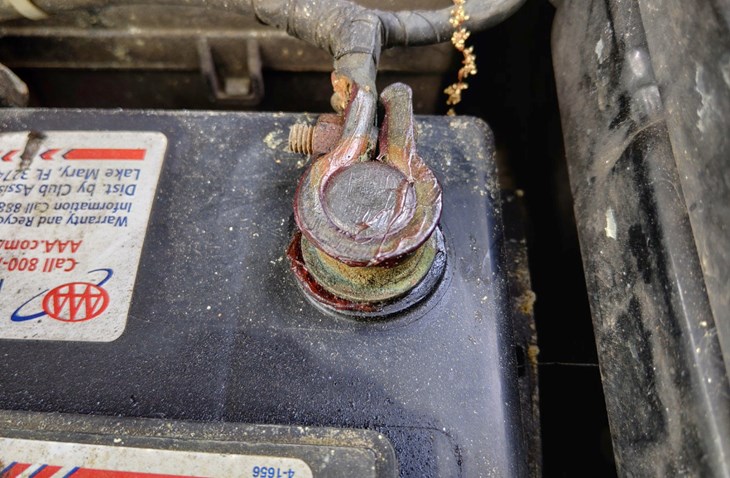 True to its claim, Thread N Post successfully prevented new oxidation from forming on the battery terminals. But the big surprise was what it did to the positive terminal of our battery. See those spots of shiny copper under the peeling layer of oxidation? That layer of oxidation was rock-hard when we started this test. That bit of peeling oxidation crumbled away when I touched it.

As it turns out, Thread N Post isn't just a protectant. It also destroys oxidation. There is something in this magic magenta compound that reacts with the white corrosion that forms on electronics and separates it from the conductive metal underneath.

Just to make sure this wasn't a fluke, we tried the same experiment with the corroded 7-pin plug on our car trailer. Trailer plugs also tend to form the same white powdery oxidation, which causes the trailer brakes and lights to eventually stop working.

We didn't bother cleaning our trailer plug for this experiment. We just applied a thin layer of Thread N Post on the metal contacts, plugged in the connector on the car to spread it into the plug, removed it, and left it outside. 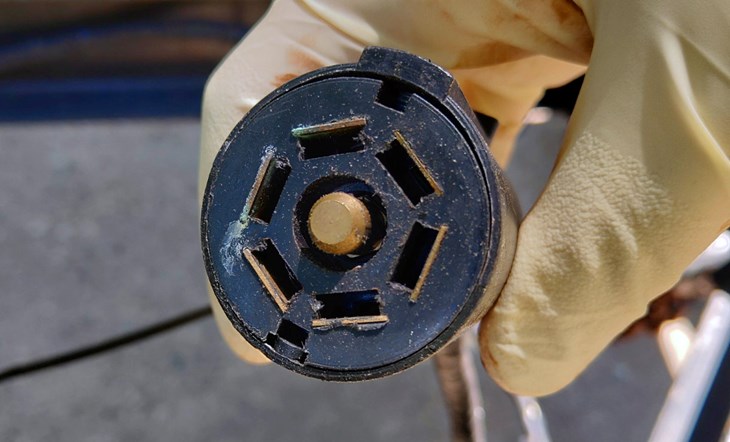 A few days later, came back to find that most of the oxidation had disappeared. It was exactly the same thing that we saw on the battery terminals. The Steel Camel Thread N Post had dissolved almost all of the circuit-killing corrosion: 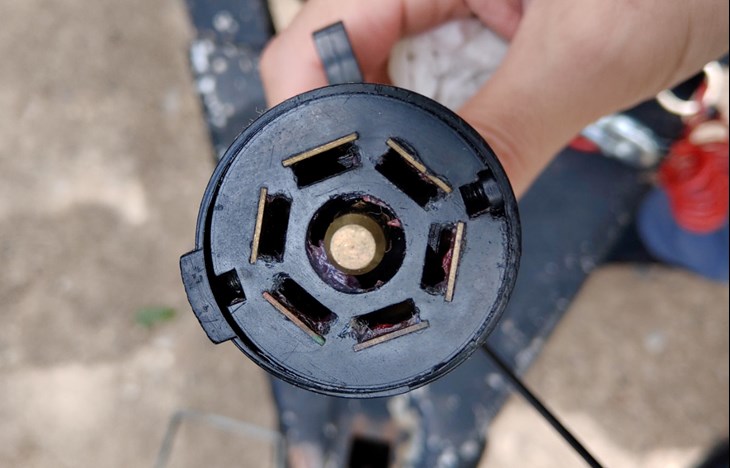 We asked Steel Camel's Dan Jenkins about this unexpected result. While he wasn't about to give away his secret sauce, he did mention that Thread N Post was not designed to be a detergent, but that it does have some cleaning properties.

These results mean that Thread N Post is the first electronics protectant that we have ever used that actively removes corrosion and oxidation from electrical connections. We have no idea which of Thread N Post's active ingredients does this. All we can say is that it's a game changer for car enthusiasts, especially those of us with aftermarket audio systems or older cars that suffer from corroded ground terminals.

Results: In a Class of Its Own

Preliminary Conclusion and What's Next 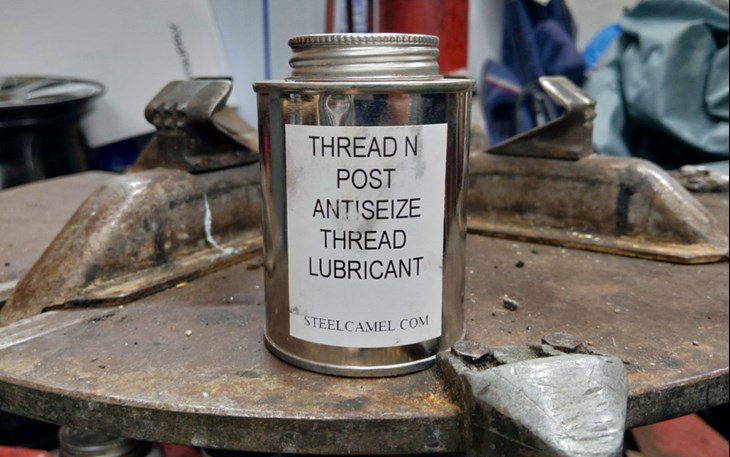 Steel Camel Thread N Post has performed remarkably well in our testing so far. Our preliminary results show that Thread N Post shares some of the best qualities of the popular Nickel and Copper anti-seize products without the negative side effects (e.g. skin irritation from touching nickel anti-seize or metal compatibility issues with copper anti-seize).

Our testing is far from complete though, and we wanted to see what else Thread N Post could do. So, keeping in the spirit of experimentation, we applied this unique compound to a variety of other areas on our street and race cars to see how it would behave in various conditions. These areas include:

Some of these applications would technically be considered off-label use of Steel Camel Thread N Post. But the label on our sample bottle has so little text on it to begin with, we thought it would be ok to venture outside of the manufacturer's recommendations.

Who knows? Maybe we will find a cool new application for that Steel Camel themselves haven't thought of. It wouldn't be the first time that Thread N Post surprised us in a real-life test.

We'll be back with our final test results in a few weeks. Until then, we'll see you at the track.

For the first time in the history of StudioVRM, we received this bottle of Thread N Post from Dan Jenkins at Steel Camel specifically for this test. That said, neither StudioVRM nor Roger Maeda are affiliated with or sponsored by Steel Camel. These tests were created and are being conducted independently and without input from the manufacturer or any of its dealers.