In the mid-2000's, a motorsport enthusiast in the UK designed a metal device that would let you lock the lap portion of your car's 3-point seatbelt and use it like a cheap racing seat. This device was called the CG-Lock and it was a fantastic tool for autocrossers and track day enthusiasts alike. Yours truly had one for his street-driven Nissan 200sx and loved it.

In the late 2010's, nostalgia drove this author to look for another one, only to find that they were no longer being produced. Instead, the inventor had adapted the concept and turned it into an ergonomic device to help prevent back pain from long drives in your street car. This new device is made of a softer neoprene-like material and is (rather oddly) called the SHOFT. So being a sucker for random car gadgets, I bought one.

As it turns out, it's actually quite useful - probably more so than the old CG-Lock. See for yourself on the StudioVRM youtube channel:

Shortly after we released this video, I received a message from Graham Cox, the inventor of the SHOFT. He thanked us for our candid review and offered to send us one of the discreet black-on-orange version of the SHOFT for us to try out. According to Graham, it would be "as black as James Bond's bowtie."

Well, a few days later we got his package. Curiously, instead of coming by Royal Post, this package came through the US Post Office. It turns out that Graham's generous gift came from the desk of Wil Jacques, Graham's US-based distributor for SHOFT. Apparently the SHOFT is called CINCH in the US and comes in a package that has been redesigned for the US market. Based on the catchy name and the eye-catching packaging, it looks like it should do well on store shelves here in the US.

Graham was right about the look too. The black version is finished in a classy deep satin black. While we attention-seeking racecar drivers love safety orange, this black version disappears into the shadows on a modern car seat belt. I suspect this will be the more popular option for most fashion-conscious drivers. 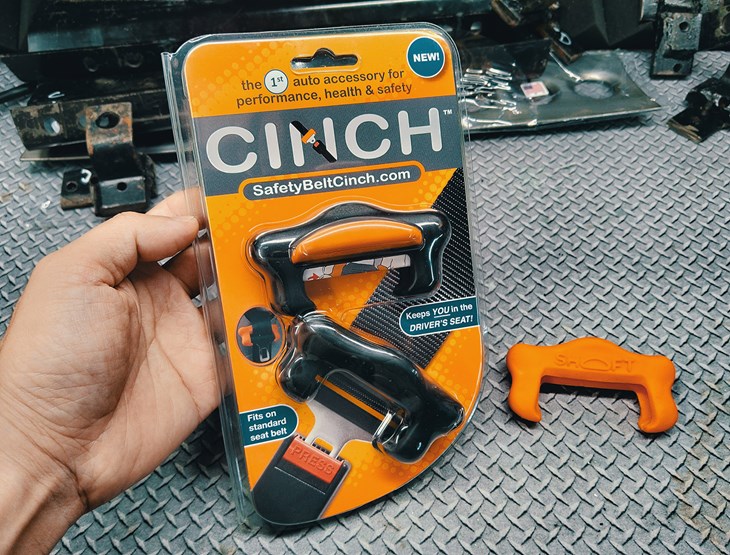 Neither StudioVRM nor Roger Maeda are affiliated with SHOFT. All products tested were purchased at full price out of Roger's own pocket. Thankfully, international shipping from the UK is still cheap.

The black SHOFT in the last picture was sent to us by Graham Cox and Wil Jacques, maker and US distributor of the SHOFT (aka CINCH) device as a thank you for publishing the review. Since we already had enough SHOFT devices for our entire fleet of street cars, we gave this new device to our team's Race Engineer. We'll update this article if we have any new findings with this model.